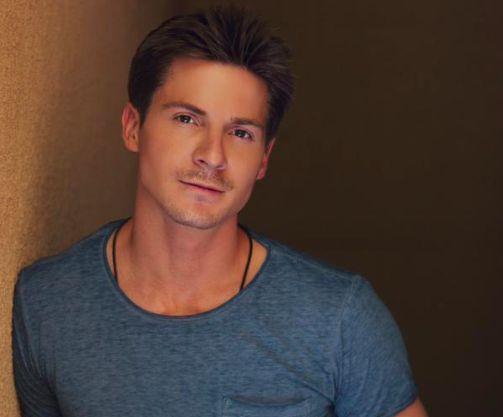 Robert Palmer Watkins talked to Soap Opera Digest for a short interview last week. He revealed how it feels to be on “General Hospital,” what is like to work with Emme Rylan, and what type of jobs he had before landing on the ABC soap.

He was asked if he felt he was the ONE after he auditioned for the part. He said he wasn’t sure. He felt like it could go either way. It didn’t help his anxiety when it took the soap producers several months to get back to him. He was asked to do a screen test with Emme Rylan (Lulu). He noted that Emme is amazing on every level. “She has been so sweet and accommodating since I arrived on the set,” he noted. He went on to say she helped him with everything from where to go in the studio to his taxes. “She’s a beautiful person inside and out,” he said. He mentioned that Jane Elliot (Tracy) has been a mentor to him on the set. He said she gives great feedback and advice. “when she gives you a compliment, she is sincere. She doesn’t give kudos to just everyone,” he explained.

He said that being on “GH” is a surreal experience for him. His mother watched the show when he was growing up, so he knows of the show from her. She explained to him the significance of Luke Spencer (Anthony Geary) and Laura (Genie Francis)- and how their complicated relationship is important to the show. “It’s a pretty big deal to her that I am in Port Charles,” he said proudly.

Before taking over being Dillion in Port Charles, Robert revealed he took odd jobs in L.A. He was a valet parker, a waiter, a greeter in a store, and a bellman. He even did a few random bartending gigs before landing on the soap. He assured Soap Opera Digest that “General Hospital” is the best ‘gig’ he ever had, and every day when he arrives at work he has to pinch himself to make sure he isn’t dreaming. How do you feel about the character of Dillon? Do you think he will ever get over Lulu?

‘The Young and the Restless’ Interview: Scott Elrod Talks Portraying Joe Clark On Y&R, Fans and Working With Christel Khalil