‘General Hospital’ (GH) Spoilers: Will Patrick Suspect Jason Morgan Is Alive, And Hide It From Sam? 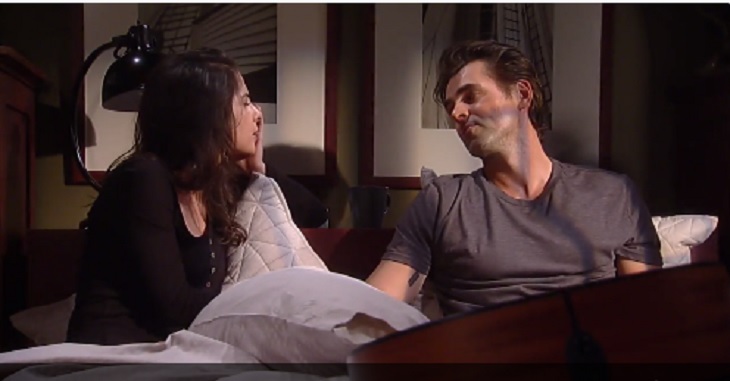 It wouldn’t come as a huge shock to report, “General Hospital” spoiler’s reveal that Patrick Drake (Jason Thompson) was starting to suspect Jake’s (Billy Miller) true identity could be Jason Morgan. He was deathly scared of losing Sam (Kelly Monaco) to him, knowing they have a real connection that neither one of them can explain. He also knows that Sam is not over Jason Morgan’s death- and worried she may never be able to move on to marry him. He seems to hate living as second-best in Sam’s eyes- and not measuring up to Jason Morgan.

Sam loves Jason in a way that she can’t really explain. She felt connected to him on every level- and even though she loves Patrick, her love for him isn’t the same. Patrick was aware of that when he asked her to marry him. She told him she’d think about it before giving him an answer. She told her father, Julian (Willian deVry) that the timing felt wrong to consider another man’s proposal. It was her wedding anniversary (Jason). She said, “It is more maybe than no. However, I still don’t know how I feel about it.”

Patrick’s patient, Sonny (Maurice Benard) seemed convinced that Jake was Jason. He wanted to find out why he felt this way. Sonny explained the way he killed those men in the warehouse was just like Jason. He also would always save him, just like Jake did. So, he felt like he HAD to be Jason- even though he knows that he is dead. Patrick looked off as to finally understand Sam’s connection to Jake.

Is it possible that Patrick suspects that Jake is Jason too? If so, will he tell Sam about his sneaking suspicions? If he doesn’t clue her in, that would mean he is hiding info from her- making him as bad as Liz (Elizabeth Herbst). It seems like he has possibly suspected it for quite some time, and it’s all coming together for him now. Will Patrick figure it out, or will he dismiss it, just so he won’t have to face Jason Morgan could be alive- and he COULD lose Sam forever?

Share your thoughts in the Comments section below, on our Facebook Page, or join our FacebookGroup for Discussion.

‘The Bold and the Beautiful’ Spoilers: Watch The B&B Video Preview For Wednesday September 30 – SEE IT HERE!