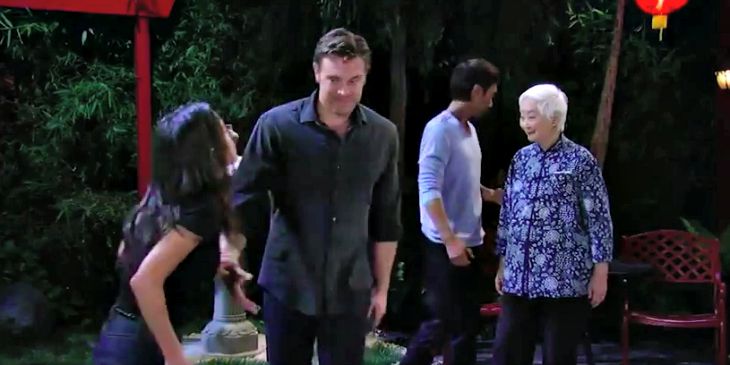 Sam Morgan [Kelly Monaco] and Jake Doe [Billy Miller] are at Noodle Buddha talking about her “dead” husband and Sam shares that she thinks Jason may not be as dead as everyone thinks. Then things go crazy when Mrs. Yi, the proprietress of the eatery, who is now nearly blind mistakes Jake for Jason. When will people notice that anyone who just hears Jake thinks “Jason”?

As a result, the owners offer to host an impromptu vow renewal and, oddly, instead of telling them Sam’s hubby is dead, Sam and Jake decide to step into the ceremony for the benefit of the elderly lady. They will say their I do’s again, right in the spot they got married four years ago. With Mrs. Yi’s offspring officiating, things will get awkward quick when it comes to “kiss the bride.”

Jake may give Sam a perfunctory peck on the lips and this will cause more flashbacks, but he still isn’t putting the pieces together. Later, Jake will serve as witness at another wedding – this one between Carly Corinthos [Laura Wright] and Sonny Corinthos [Maurice Benard]. Liz Webber [Rebecca Herbst] is also a witness and she looks guilty at Jake as Sonny and Carly say I do.

This wedding is to establish Carly’s legal right to share custody of Avery as a step-mom and this allows them to put a legal protest in motion to shut down Ava Jerome’s [Maura West] custody bid. Speaking of Ava, she’s at the meeting of the five families and is asked to name Sonny’s shooter. Ava doesn’t want to point a finger at Julian Jerome [William deVry] and will says it’s Carlo Rivera [Jeffrey Vincent Parise].

As they leave the meeting, Michael Quartermaine [Chad Duell] issues a threat to Ava. Does he warn her off about business? Is it about Avery? Or is it that he thinks she’s lying about Carlos to get brother Julian off the hook? Ava won’t like being threatened – she’s got enough of that from Paul Hornsby [Richard Burgi] and may stand up to Michael in a way he doesn’t expect.

Anna Devane [Finola Hughes] asks Alexis Davis [Nancy Lee Grahn] if she really thinks Julian is out of the mob biz. Alexis certainly wants to think the best of her honey. Then Anna turns to Julian and confronts him about his involvement with Duke Lavery’s [Ian Buchanan] shooting. Julian will blame this on Carlos acting as a rogue operative and insist his hands are clean.

Paul tells Dante Falconeri [Dominic Zamprogna] that he’s excited to work with him at the PCPD. Dante, however, is off his cop game because he’s distracted by his dad’s shooting. Looks like Dante won’t get any bad vibes from Paul that he might have if he was paying closer attention, but he’s too distraught to focus on anything but Sonny.

Patrick Drake [Jason Thompson] tells Liz he thinks he fouled up his relationship with Sam by jumping the gun on the proposal. Liz encourages Patrick that Sam loves him and will say yes to the proposal. Of course, Liz wants Patrick to wed Sam so she can feel better about saving Jake – she couldn’t care less about Patrick’s real feelings. Nice Liz, real nice…