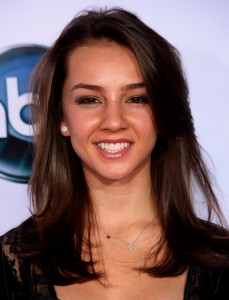 “General Hospital” (GH) spoilers may have fans wondering if Kristina Davis (Lexi Ainsworth) may stick around Port Charles longer than she expected. Mom Alexis Davis (Nancy Lee Grahn) would be happy to have all her daughters in Port Charles permanently, don’t you think?

In an interview with ABC Soaps In Depth – September 14 through September 28 – Lexi Ainsworth revealed that she has filmed just a few episodes so far, but there is a possibility Kristina won’t leave Port Charles right away. Her dad Sonny Corinthos’ (Maurice Bernard) condition is touch-and-go right now – would Kristina leave not knowing if he will be in a coma or possibly paralyzed for the rest of his life? Ainsworth revealed that she was very happy to get the call from to return. “It was a nice surprise. I was shocked. I wasn’t expecting it. Just because it had been quite some time since I was on.”

Lexi left “GH” in 2011 and was replaced by Lindsey Morgan in 2012. While Ainsworth has had a lot of fun discovering “new things” that Kristina has done during the year she was gone and rediscovering old things she hand forgotten- don’t count on Kristina Davis being the same. Lexi Ainsworth was quite frank in the interview, “I’m not going to try to be what the other Kristina was.”

Whether Kristina sticks around or not is still up in the air. “I can’t say that I’m coming back full-time yet. I’m just filming a few episodes now and then, we’ll see what happens. I’m interested in seeing where the story goes. We’ll see. We’re in talks, so it’s all up in the air at this point.”

A change in head writers – Jean Passanante and Shelly Altman have taken over the writing team of the daytime drama – many fan favorites may return to “General Hospital” – even if it’s for short periods of time. “GH” fans already know that Damien Spinelli (Bradford Anderson) is headed back to Port Charles – he’s scheduled to begin filming sometime in late September and could be the one who FINALLY reveals Jake Doe as Jason Morgan (Billy Miller).

“General Hospital” fans would you like to see Lexi Davis stay in Port Charles for more than just a few days – or weeks? Would you like to see her back in town full-time? Stay tuned! You never know where TPTB – and the new head writers – may have planned.