‘Days of Our Lives’ Spoilers: Paul Has Major Revelation, Jordan Says Goodbye to Rafe, Clyde Gets a Serious Warning #DOOL 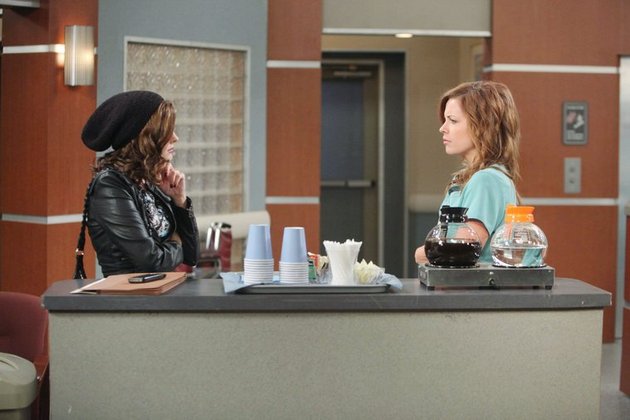 ‘Days of Our Lives’ spoilers hint that Paul (Christopher Sean) will notice something about his mom’s behavior that could lead to a major revelation later on. From the moment Tori (Hira Ambrosino) came into town, she’s been on edge. Paul has already noticed Tori’s jumpiness and he’s growing more suspicious each day. DOOL viewers know that Tori had a strange reaction when she saw Marlena (Deidre Hall) and John (Drake Hogestyn) at Club TBD. Now it seems Paul will observe that Tori is avoiding certain Salemites, which presumably includes “Jarlena.” Does this mean that Paul could be John’s son as the rumors have said? We’ll have to wait and see, but one thing’s for certain: Tori has a connection to Salem and she doesn’t want Paul to know about it.

Other “Days of Our Lives” spoilers hint that Jordan (Chrishell Stause) will be packing up and heading to Manhattan soon, but she’ll have a heartfelt moment with her ex before she goes. Rafe (Galen Gering) never really got over the breakup and the news that Jordan is leaving will undoubtedly come as quite a shock. Still, Jordan seems to have forgiven Rafe so at least they can part ways on good terms. “Days” fans will want to grab the tissues as Jordan bids Rafe a fond farewell. Some viewers will weep with despair while other will cry tears of joy, but for better or worse, “Days of Our Lives” will soon be Jordan-less.

Jordan will also give Clyde (James Reed) a serious warning before she leaves. Clyde can say he’s changed until the cows come home (and he probably would use that phrase), but Jordan knows him better than that. Clyde may have fooled Ben (Robert Scott Wilson) with his speeches about making things right, but Jordan will likely warn him not to hurt her brother. After all, Jordan has protected Ben from Clyde for all these years and there’s no reason she wouldn’t try to now. Jordan will probably tell Clyde that he needs to stay in line—or else. Unfortunately, DOOL watchers know that Clyde is as crooked as they come so it’s only a matter of time before he causes more trouble.

So “Days” fans, what do you think about Tori’s avoidance of John and Marlena? Does she have a connection to any other Salemites? Do you think John is Paul’s father? What about Jordan’s farewell episode? Do you wish she could have worked things out with Rafe and stuck around? Will Clyde listen to her warning? Let us know what you think in the comments below and don’t forget to check Soap Opera Spy tomorrow for the latest “Days of Our Lives” spoilers, rumors and news. Or, you can catch up on the latest DOOL gossip by clicking here…

Get Exclusive ‘Days of Our Lives’ Spoilers: Paul Has Major Revelation News & Updates!

‘The Bold and the Beautiful’ Spoilers: Brooke Tries to Derail Quinn’s Engagement to Deacon – Maya Suspicious of Nicole’s Actions

‘The Bold and the Beautiful’ Spoilers: Brooke and Wyatt Make a Discovey – Rick Still Might Have Feelings for Caroline