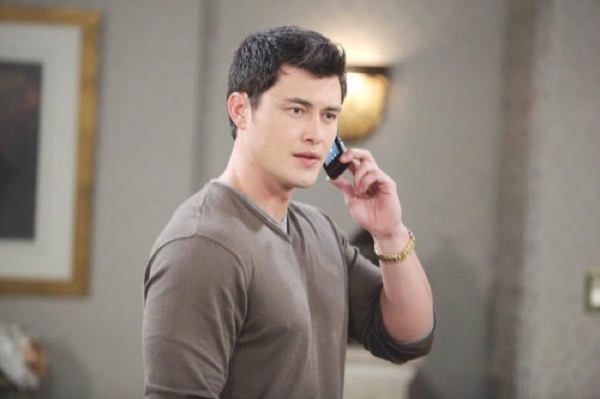 “Days of Our Lives” spoilers reveal that explosive episodes are in the works as major secrets are about to be exposed. Will (Guy Wilson) has been struggling with whether or not to tell his husband that he cheated, but he won’t have to mull it over much longer. Paul has been hinting that he’s gotten close to another guy and though Sonny (Freddie Smith) doesn’t know who it is just yet, the seeds have been planted. Plus, we can’t forget about that sneaky bellhop, Derrick (Spencer Neville). Rumor has it that he’ll play a role in how everything comes out. To complicate matters even more, Sonny will soon be the victim of a brutal attack. “Days” fans will be anxious to see just what he knows before he literally gets stabbed in the back. As his life hangs in the balance, both Will and Paul (Christopher Sean) will surely wrestle with their feelings for the man they love.

It appears Freddie Smith is still taping “Days of Our Lives” episodes, which means that Sonny will pull through after his surgery. However, DOOL viewers still won’t want to miss a minute in the coming weeks. Other “Days of Our Lives” spoilers hint that Paul will unknowingly walk right into trouble. We don’t know for sure what that means, but there’s a good chance that trouble will be Will Horton. Will may learn of Paul’s past connection to Sonny and accuse him of knowing more than he let on.

Whatever happens, “Days of Our Lives” watchers are sure to be glued to their screens as the bomb of secrets finally explodes. There will certainly be plenty of tears and shouting matches as everything falls apart. When the smoke clears, it’s tough to say who will be left standing. Can Will win Sonny back or is their relationship damaged beyond repair? Stay tuned to DOOL to see just how bad the truth hurts.

So “Days” fans, what do you think about this exciting storyline? Did you see Sonny’s attack coming or were you caught off guard by the twist? Will his near-death experience cause his husband to reveal what he’s been hiding? Will Paul get in the way and make things even messier for Will? Let us know what you think in the comments below and don’t forget to check Soap Opera Spy tomorrow for more “Days of Our Lives” spoilers and news.

The Bold and the Beautiful Star Linsey Godfrey Hit By Car