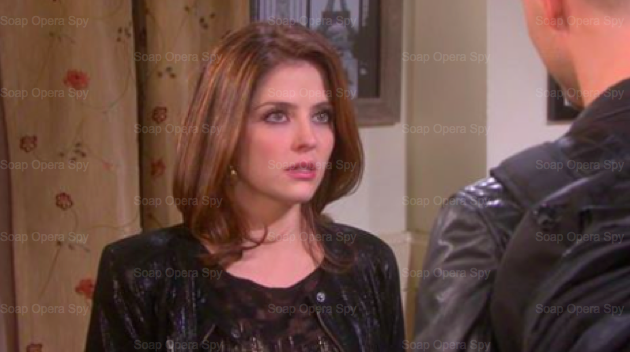 “Days of Our Lives” spoilers tease that creepy Clint (Lucas Kerr) is about to get even creepier. Clint returned to Salem with strict orders from Kristen (Eileen Davidson). DOOL viewers watched as Clint shot a tranquilizer dart into Brady’s (Eric Martsolf) neck and took a vial of his blood. Now it seems it’s Theresa’s (Jen Lilley) turn. “Days of Our Lives” spoilers hint that Theresa is in for quite a surprise when her bad-boy beau drugs her. We all know Kristen’s return is imminent, but this storyline is becoming puzzling to say the least. However, there are a few key pieces of information that could help “Days” fans sort everything out.

When a “Days of Our Lives” casting call went out for twin boys, a lot of people made the assumption that Kristen would pop back into town with not one, but two babies. However, we have to remember that twins are often used to limit the amount of scenes small children have to film. It seems more likely that the twins will be portray one character, just like Harper and Sydnee Udell split the role of Arianna Grace. Still, the casting call did seem to give us a clue to the baby’s gender. Surprise, Brady and Theresa! It’s a boy!

Next, there’s the whole issue of why Kristen wants Brady’s blood and presumably Theresa’s as well. One possibility is that Kristen knows Theresa is starting to remember that her embryo was stolen and it’s likely that the child’s parentage will be challenged. Perhaps Kristen wants Theresa’s blood so she can try to pass it off as her own when a sample is requested. That may actually be where Kristen slips up. DOOL viewers might remember that Theresa donated blood for Eve’s (Kassie DePaiva) surgery, but the procedure never happened. It was mentioned that they had a blood type that was rare and this could somehow raise a red flag. Plus, Daniel (Shawn Christian) has suddenly been inserted into this storyline. (Isn’t he always?) Now that he knows someone was after Brady’s blood, you can bet that Dr. Dan will be on the case.

As for the blood sample from Brady, it seems a little odd that Kristen would need it. Then again, maybe she just wants to make sure Brady is indeed the father. After all, Theresa does have a—well, a loose lifestyle. There’s no point in Kristen worrying her pretty little head over any of this if the baby’s dad is some one night-stand whose name Theresa can’t even remember. Fortunately, we all know that this bouncing baby boy is almost certainly Brady, Jr.

We may not be able to tell exactly where this storyline is leading, but we do know that things are about to get interesting. The rumors say Kristen will be back any day now and she’s going to stir up big trouble in Salem. We’ll give you updates on the “Days of Our Lives” baby drama to come.

So “Days” fans, what do you think about the news that Clint will drug Theresa? Why do you think Kristen wants Brady and Theresa’s blood? Will Kristen really be able to pull off this scheme? Let us know what you think in the comments below and don’t forget to check Soap Opera Spy tomorrow for the latest “Days of Our Lives” spoilers, rumors, updates and news.

‘The Bold and the Beautiful’ Spoilers: Rick Fires Ivy, Offers Quinn A Job – Brooke Prepares to Make Amends to Deacon