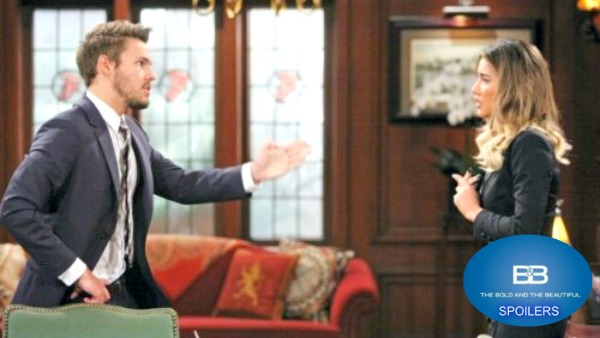 ‘B&B’ spoilers tease that Liam Spencer [Scott Clifton] may soon ask for his ring back from Steffy Forrester [Jacqueline MacInnes Wood] after she appears to be responsible for yet another injury to Ivy Forrester [Ashleigh Brewer].

Here’s how it happens. We’ve seen that Ivy’s initial shocking accident – also linked to Steffy – has caused her to rethink all her priorities and Ivy’s now insisting she wants another shot at love with Liam,
despite her involvement with his brother Wyatt Fuller [Darin Brooks].

Ivy has insisted several times to Liam that she still loves him. But in coming days, when Ivy is again making an emotional appeal to Liam to give her another go, Steffy will hear Ivy say she loves him. What makes this worse is that Liam will finally admit he loves Ivy too.

This will set Steffy off in a big way. Steffy will first confront Liam who will, as always, try to talk Steffy down. Liam will assure her that she needs to leave it alone and it’s not as it seems.

Liam has cause for concerns – the last two times Steffy has had a confrontation with Ivy, she’s ended up looking like a violent loon. But does that stop Steffy? Does anything ever? Ivy just had the restraining order against Steffy canceled, but it looks like she acted too soon.

Steffy ignores Liam’s appeal to just leave Ivy alone and goes to confront her. What’s really over the top about this incident with Steffy is that Ivy was packing to leave for Australia because, despite his admission of love, Liam wasn’t going to break up with Steffy.

Steffy could just let Ivy leave the country where she would be thousands of miles away from Liam. But, as we know, Steffy can’t let anything go. Ivy is all packed up to go, with her suitcases conveniently at the top of a staircase, but then Steffy will come at Ivy making accusations about her trying to steal Liam.

B&B spoilers reveal that Steffy will send Ivy tumbling over her suitcases and down the stairs. How bad will Ivy be hurt this time? And will Steffy end up in cuffs for real this time over what will look like yet another in a string of assaults perpetrated by Steffy against Ivy?

B&B spoilers indicate this will be one incident too many for Liam to tolerate. Liam is a peaceable guy and he’s given Steffy chance after chance to chill out and prove she’s not a maniac, but she can’t stop – because she kind of is – at least when it comes to Ivy.

Liam will finally have to face facts and realize that Steffy is not the kind of woman he needs in his life. Ironically, that’s exactly the point Ivy has tried to make to him a number of times recently. Looks like Liam may finally start to realize it.

Steffy has been able to talk Liam out of breaking things off with her several times recently – can she succeed once again? Spoilers tease that Liam will go through with the split this time and ask for his ring back.

But from there, will Ivy and Liam couple up since they agree they both still have feelings for each other? Or will he be too crushed over calling it quits with Steffy to rebound so quickly? Check back with Soap Opera Spy often for tons more “B&B” spoilers and news.

‘The Young and The Restless’ News: Scott Elrod Got Engaged To Vanessa Vazart On Christmas Day

‘B&B’ News: Heather Tom Shares She And Her Hubby Hiked 40 Miles With Son On Their Back

The Bold and the Beautiful Spoilers Friday, January 24: Thomas Warns Steffy to…

The Bold and the Beautiful Spoilers: Shauna Misguided By Quinn – Is She In…