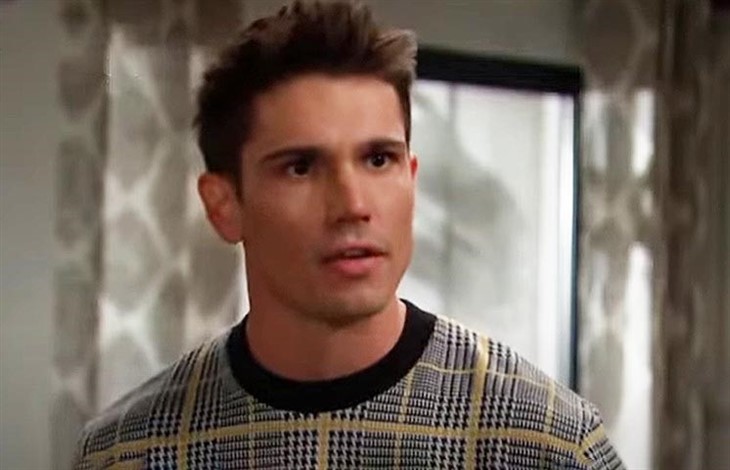 The Bold and The Beautiful spoilers and updates tease during an unexpected encounter, John “Finn” Finnegan (Tanner Novlan) will blast Sheila Carter (Kimberlin Brown).  Finn doesn’t like his birth mother and certainly not her blackmail, and he can’t hold his tongue anymore!

The Bold And The Beautiful Spoilers – What Did You Do To Bill Spencer?

According to B&B spoilers, Finn doesn’t know Bill Spencer (Don Diamont) intimately, but he did get a fairly good idea when he saved his mother, Li Finnegan (Naomi Matsuda) and flew him to Monaco. The flight to Monaco took several hours, and they talked a lot, and he knows that Dollar Bill is not acting like himself-the change is bizarre. Finn has his suspicions that Sheila may have drugged him with some kind of mind-altering drugs and that’s how she’s controlling him, possibly also blackmailing over something in his past.

In talking about Bill with Steffy Forrester Finnegan (Jacqueline Macinnes Wood) he finds out that there is a part of Bill’s life he never talks about and no one knows about. This was a period between when he lived in Las Vegas and came to Los Angeles to run his father’s business; not knowing a lot about that time-might Sheila?

B & B Spoilers – What Happened Between Las Vegas And Los Angeles?

Steffy knows that Wyatt Spencer (Darin Brooks) was born in Las Vegas after Bill had an affair with a very young Quinn Fuller (Rena Sofer). Quinn never knew that much about what happened in between, and Wyatt didn’t know Bill was his father until they moved to LA and all reconnected.

However, it was verified that Quinn was not underage at the time even though Bill is a few years older-they can rule that out as a source of blackmail for Sheila. There has to be a reason Bill’s behavior is so bizarre and his personality changed – but is it drugs, blackmail, or a combination of both? Might Sheila have hypnotized Bill, or is there something physical going on she’s taking advantage of, like a brain tumor?

There in the middle of a nice lunch at Il Giardino, Finn spots Sheila; and he blasts her with his suspicions that she’s either drugged, blackmailed, or taken advantage of Bill. How else would a strong minded and powerful man have turned into Sheila’s lap dog, obeying her every whim? No one who knows him very well can figure it out, although Finn has noticed that Bill seems drugged or hypnotized.

Finn tells his birth mother that if she really loved this man like she claims she does she wouldn’t be controlling him. Sheila counters they love and need each other, and Bill is fully in control of his faculties-Finn knows that can’t be true.