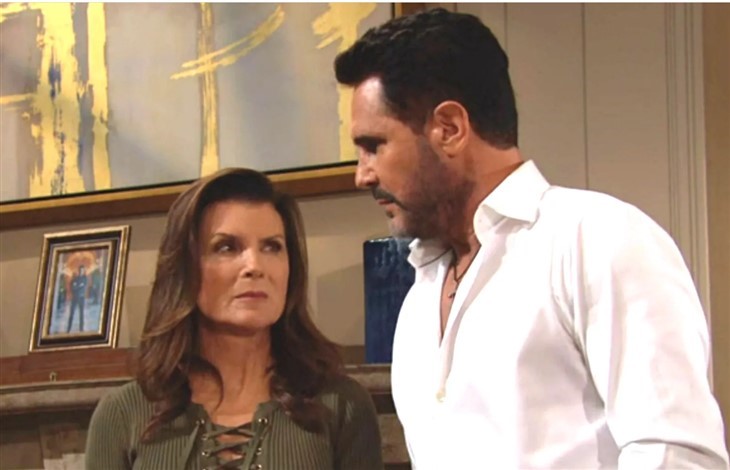 The Bold and the Beautiful (B&B) spoilers tease that Sheila Carter’s (Kimberlin Brown) and Bill Spencer’s (Don Diamont) connection will get strange in the weeks ahead. We will find out about Bill’s part in the villain’s plot.

That’s not even the weirdest part about the storyline. Bill was an aggressive and confrontational person. Now, he barely talks and shows no emotion. The whole storyline is bizarre. The audience keeps hoping Bill is pretending to love Sheila in some plot to take down the monster.

For weeks now, the B&B viewers threw theories out to explain Bill’s strange behavior. Some believe that Sheila drugged Bill or gave him some love potion. They don’t have another way she could control him this way.

Another theory is Sheila hypnotized Bill. If that is what is going on, the phrase she keeps repeating makes sense. She keeps repeating that she loves him unconditionally, and he loves her too. The frequency of her saying that exact phrase is strange.

Lastly, Bold and the Beautiful fans wonder if Bill is working with the police to uncover details of Sheila’s crimes. Perhaps, they think Bill might be able to get Sheila to confess to crimes and get details that would lead to a conviction. This theory seems unlikely, but stranger things have happened on B&B.

The reason Bill allows Sheila to spread so much chaos in his life can be easily explained. The Bold and the Beautiful spoilers state that Bill believes he doesn’t deserve anyone better than Sheila. He thinks after all his schemes and horrible acts, he deserves to spend his life with someone evil like Sheila.

If Bill suffers from depression, it could explain why he believes he deserves Sheila. So far, Bill’s family hasn’t been successful in reaching him. He refuses to listen to anyone and cast Sheila out of his house and life.
B&B fans, how do you think Sheila is controlling Bill? Keep watching Bold and the Beautiful, airing weekdays on CBS and streaming on Paramount Plus. This site is a leading source for everything linked to The Bold and the Beautiful. Check back regularly for B&B spoilers and news!