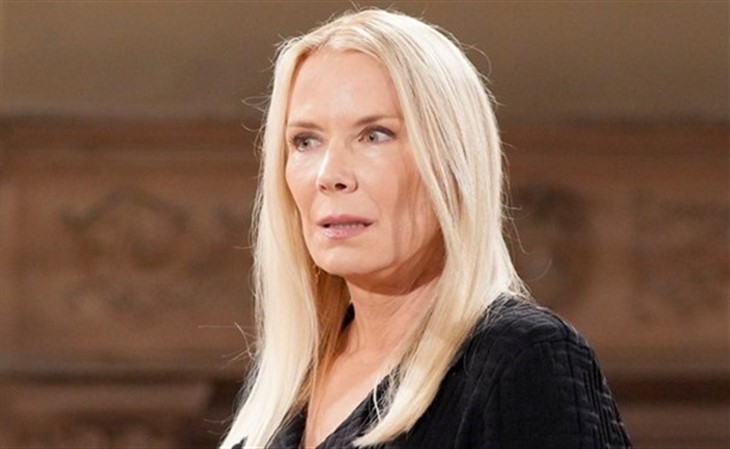 The Bold and the Beautiful (B&B) spoilers document that Brooke Logan (Katherine Kelly Lang) is teased to pose a renewed threat to Sheila Carter (Kimberlin Brown). Renewed is an apt verb to use because devoted fans recall Sheila’s apprehension about Brooke’s troubles with Ridge Forrester (Thorsten Kaye) and how that impacted Deacon Sharpe (Sean Kanan) at that point in the plot.

Of course, Sheila also knows Brooke is aware of her role in the champagne label switch. That deceptive and cruel move caused Lang’s character, who is an alcoholic, to drink liquor slightly more than a year ago on the calendar.

Sheila’s New Year’s Eve plan included Deacon who stopped by the Logan mansion that fateful night. Ridge was not home because the weather delayed his return from a business trip.

The Bold And The Beautiful Spoilers – Deacon Sharpe’s Loyalty Tested

Sheila was shielded from justice by Deacon long before Bill Spencer (Don Diamont) appointed himself her savior. Fans recall one of last year’s more humorous scenarios. Sheila made eye contact with Deacon at Il Giardino while in disguise.

Deacon thought a woman he found attractive followed him from the bar area to his apartment. Without speaking, Sheila used romantic manipulation to overwhelm Deacon’s senses and enhance his bruised ego.

Kanan’s character recently met with Sheila just before her release from prison. He rededicated himself to her cause, believing she would be behind bars for years, if not forever. But his awareness of her champagne label switch and coupling with Bill could alter Deacon’s loyalty.

Sheila was noticeably upset when Deacon told her that Brooke and Ridge had serious marital problems last year. She feared a divorce would create an opening for Deacon to reunite with his true love.

Sheila was not in love with Deacon. She used him as her safe harbor while developing a plan she referenced but did not detail on numerous occasions.

So, Brooke’s feared single status could have led to Deacon leaving the apartment. That did not happen, which allowed Sheila to avoid what would have been an unwanted uprooting.

Teasers indicate that Brooke becomes infuriated when learning Bill is rejecting the pleas of numerous people, including her sister and his sons. So, she takes matters into her own soapy hands.

Like Deacon, Bill considers Brooke to be his true love. Both men hold a special place in her heart, with Deacon being Hope Spencer’s (Annika Noelle) father and Bill being her last husband before Ridge.

Brooke can get through to Bill because of their unique connection. While Lang’s character recently told Bill she does not love him, he is influenced by her presence.

Sheila recognizes Brooke as a worthy adversary and will not take this threat lightly on B&B.