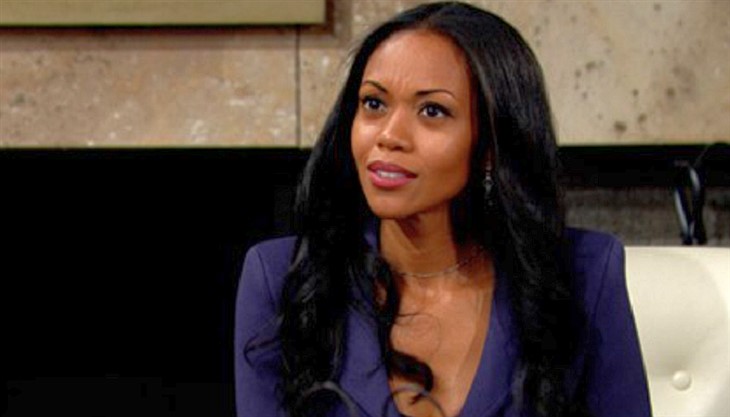 The Young and the Restless spoilers for November 14-18, 2022, reveal everything changing for Devon and Abby.

The Young And The Restless Spoilers – Amanda Sinclair Is Done

When Abby Newman Chancellor (Melissa Ordway) went to drop Dominic at Devon Hamilton’s (Bryton James) place, she never expected they would end up having sex all over the first floor of his apartment while the baby slept upstairs.

Neither one expected that Chance Chancellor (Conner Floyd) and Amanda Sinclair (Mishael Morgan) would walk in on their sheet-clad naked after-glow, but here we are. Now, Amanda is back to pack the rest of her things and demand to know if Devon ever truly loved her or if was she just a replacement for her twin, Hillary Curtis (also Mishael Morgan). Devon doesn’t quite know what to say, so Amanda has her answers and tells him that she is leaving town for good.

Although Abby wants to fight for her marriage, Chance is over it. He can’t believe Abby would break their vows like that and wonders if they should have ever been together. After all, they basically only married so they could have a baby and Devon ended up providing that baby to Abby, so why does she even need Chance anymore?

According to Y&R spoilers, Abby is devastated and vows not to give up on Chance, but maybe she needs to examine their relationship and see what substance was ever really there.

Nick Newman (Joshua Morrow) and Sally Spectra (Courtney Hope) try to find her another big job she is not qualified for and look at Chancellor-Winters. Might Sally and Nate Hastings (Sean Dominic) switch places?

Finally, Billy Abbott (Jason Thompson) and Adam Newman (Mark Grossman) actually call a truce so that they can both be on the same page and help Chelsea Lawson (Melissa Claire Egan) through her dangerous mental health crisis. Will these two be able to keep the peace for long? Stay tuned to The Young and the Restless weekdays to see how this story plays out.

The Bold and the Beautiful Weekly Spoilers: Brooke’s Heart Breaks More As Walls Close In On Thomas