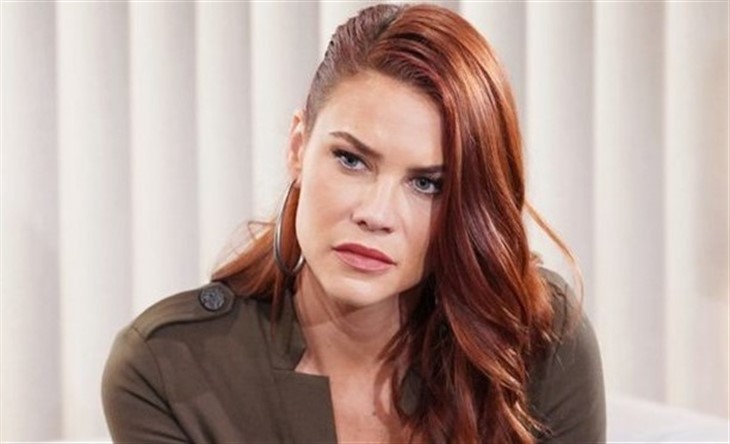 The Young And the Restless – Sally Spectra Interrogated

Y&R spoilers reveal that Sally and Nick ended up in bed again. Even though it wasn’t planned, these two just can’t seem to help themselves. When Sally goes to open the door for room service, she will face Adam Newman (Mark Grossman). After Sally asks Nick to leave her hotel room, Adam demands to know if the two are sleeping together.

In the weekly preview clip, Sally doesn’t answer Adam. However, she does gulp, so it’s clear she’s nervous. Sally knows that if Victor Newman (Eric Braeden) or Victoria Newman (Amelia Heinle) find out about the tryst, she could lose her job at Newman Media.

The preview clip also features Nikki and Deacon. Nikki goes to a hotel in Los Angeles and sends a mysterious text to Deacon. Clearly intrigued, Deacon goes to the hotel room, completely unaware that the person behind the door is Nikki.

Nikki has gone to make demands of Deacon. Nikki is using Deacon as a last resort to expose Diane Jenkins (Susan Walters). However, it seems that Deacon plays some mind games with Nikki. So, we will have to see if Nikki is strong enough to resist temptation or not.

The Young And the Restless – Kyle Abbott’s Proposal

The Young and the Restless spoilers reveal that Kyle will follow through with his plan to marry Summer Newman-Abbott (Allison Lanier) again. Kyle will kneel in front of Summer and ask for her hand in marriage for a second time. Of course, Summer is thrilled and says yes. Fans should enjoy a scene showing “Skyle” sharing a passionate kiss.

However, the second marriage ceremony could be ruined by Diane and Phyllis Summers (Michelle Stafford). Despite them both being ordered to behave, they just won’t be able to stop themselves from causing drama.

It is also teased that Jack Abbott (Peter Bergman) will give Diane an ultimatum. Phyllis will take over the “Skyle” wedding planning, which pushes Diane out. Plus, Victoria makes a dangerous deal with Nate Hastings (Sean Dominic).

What do you think is going to happen with Sally, Nick, Adam, Deacon and Nikki? What are your predictions for Kyle, Summer, Jack, Phyllis and Diane? Share your opinion in the comments.

Prince William And Prince Harry Finally Had Dinner Together