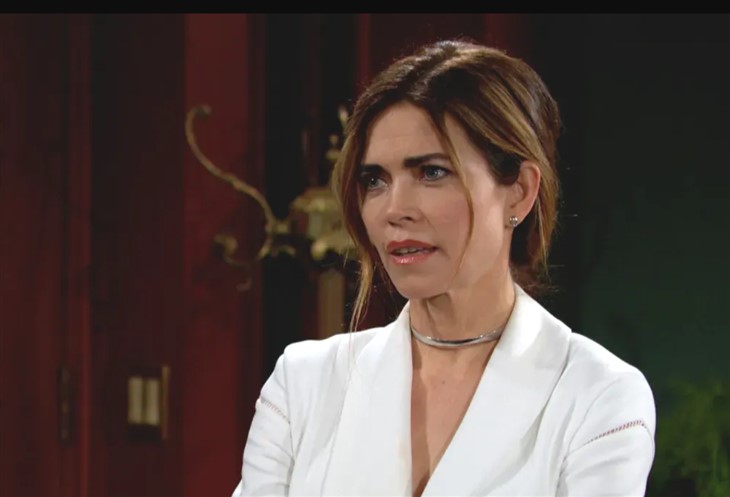 The Young and The Restless spoilers and updates tease that now that Ashland Locke (Robert Newman) is persona non grata at Newman, Victoria Newman (Amelia Heinle) will need to choose a new Co-CEO. Adam Newman (Mark Grossman) thinks he should run the “new” Newman Enterprises instead of Victoria but instead she remains CEO and picks her mother over him in upcoming episodes of Y & R!

With the ouster of Locke, Newman-Locke reverts to the original Newman Enterprises and now there is one company, not two. Adam makes a very strong suggestion to Victor Newman (Eric Braeden) that Victoria perhaps shouldn’t be running the company, citing her lack of judgment in marrying Locke. Prior to Newman-Locke being formed, Nikki Newman (Melody Thomas Scott) had been co-CEO of Newman Enterprises and she and Victoria had run the company together.

Adam feels Victoria’s having been duped by Locke proves that she doesn’t have the right instincts to do the job and he begins wrangling for the seat. Victoria, in the meantime, has already been floating the idea of a replacement for Locke.

Adam points out to Victor that he has been doing a great job at the company they had been running together when the original Newman Enterprises had become Newman-Locke. Victor agrees, but he is no longer in charge of Newman Enterprises, Victoria is and it would be her decision, not his, to choose a new co-CEO. Victor had been the one to put her in place before the Locke Ness Monster reared his ugly head and wormed his way in!

According to The Young and the Restless spoilers, Adam had hoped that Victor could pull rank, but he refuses to – he remains neutral because Adam and Victoria are both his children. Victor doesn’t know if Victoria would work with Adam even though Adam has been a big help in getting Ashland out!

As expected, Victoria bristles at the possibility of her and Adam working closely together as they would have to as co-CEOs, even though Victor does bring his name up. Victoria has anything but sisterly feelings for her younger half-brother and even though he has been trying long and hard to redeem himself, she doesn’t trust him. For the two of them to work as closely together as they would as co-CEOs, there has to be trust, and for her, the trust just isn’t there.

Adam has more than proven himself to be an astute businessman who has had success during the time he’s run the company he and Victor had together. But Victoria doesn’t seem to take any of that success into account as she makes her decision!

Ultimately, Victoria chooses her mother Nikki, whom she trusts and who was her co-CEO before the merger happened and before Ashland Locke happened. Victor is on board with Victoria’s decision but sad that she and Adam are still in conflict – but more conflict is ahead when neither Adam nor Ashland agrees to budge! The future of the family and the company will still be in jeopardy as long as Locke doesn’t leave town and keeps trying to reunite with Victoria. Adam still in the mix makes things even worse, causing conflict within the Newmans!