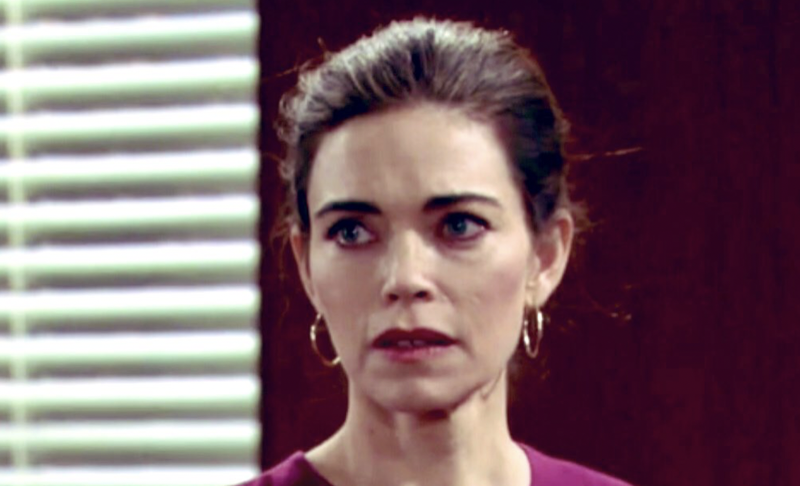 The Young and the Restless spoilers reveal that Victoria Newman (Amelia Heinle) isn’t scared of Ashland Locke (Robert Newman) or what he will do next. Perhaps she should be, though. Victoria is alone at home when she sees Ashland peering in at her through the French doors. Before Victoria can do or call anyone, Ashland is standing in front of her.

Y&R spoilers reveal that Victoria got Victor Newman’s (Eric Braeden) millions back by deceiving Ashland. Victoria felt that she had to do something to get revenge on Ashland while making it up to her father. After all, Victoria was the one who brought Ashland into their lives despite everyone’s warnings.

Victoria knows exactly what kind of man Ashland is and what he is capable of. However, Victoria seems totally unconcerned, even when Ashland shows up in Genoa City. Nick doesn’t get how Victoria could be so calm when Ashland could come after her.

Even though Ashland was jailed for violating the restraining order, he promised to get out soon. Ashland also threatened to make Victor Newman (Eric Braeden) feel the agony of losing Victoria. Ashland clearly didn’t mean getting Victoria back or even kidnapping her. Ashland was issuing a lethal threat.

During the week of July 18, Ashland will keep his promises. Ashland isn’t just released from jail but goes to take care of Victoria.

The Young and the Restless spoilers reveal that Victoria is home alone when she makes a terrifying observation. Victoria looks at the French doors and sees Ashland looking in at her. Even though Victoria tries to act fast, there isn’t enough time.

Before Victoria knows it, Ashland is inside and tells her there is nothing to fear. However, Ashland also reminds Victoria that he has nothing left to lose.

The Young and the Restless Spoilers: Nick Newman’s Instinct

According to Joshua Morrow’s (Nick Newman) interview with Soap Opera Digest, this situation has an unexpected twist. Nick goes to check up on his sister but there is no answer. Although Nick is about to walk away, he gets a gut feeling that something is wrong. Nick decides to sneak into Victoria’s house through the back.

Will Nick walk in as Ashland is looming over Victoria? Will Nick save his sister from a deranged madman? If so, don’t expect Nick to just have Ashland arrested. Morrow told SOD that Nick wants Ashland gone for good. That suggests Nick might permanently end Ashland’s reign of terror. It sounds like Ashland’s exit could be a deadly one, so stay tuned.