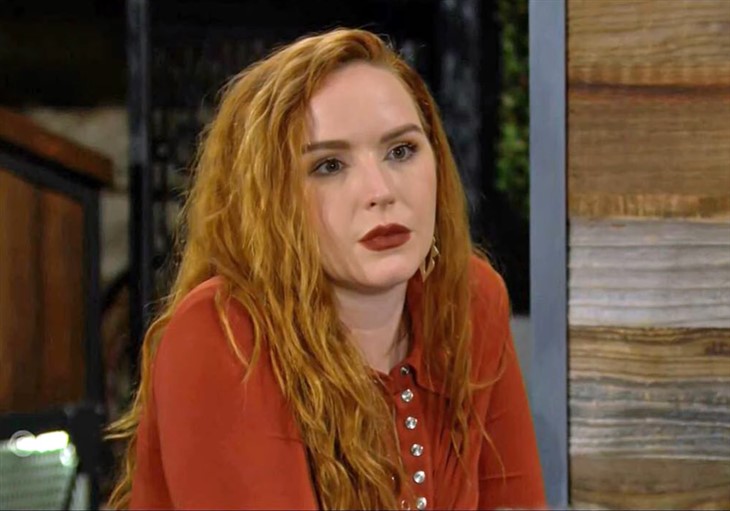 The Young and the Restless spoilers reveal that Mariah Copeland (Camryn Grimes) will strategize with Devon Hamilton (Bryton James). However, that might not mean that Mariah is taking Devon’s side. Despite her fixation on the baby, Mariah has since been working on getting better. So, could she actually persuade Devon to give up the custody battle?

Y&R spoilers reveal that Mariah has been focused on work and her relationship with Tessa Porter (Cait Fairbanks) lately. When Mariah and Tessa went to visit Abby, they learned about Devon’s request for more one-on-one time with Dominic Newman-Abbott-Chancellor (Rainn and River Ware). Mariah told Abby that she hadn’t spoken with Devon lately, but wondered if she should pay him a visit.

After Dominic was born, Mariah became obsessed with the baby. Mariah and Devon both signed legal agreements regarding the surrogacy. Both were aware that it was not their baby, but the child belonged to Abby and Chance Chancellor (Conner Floyd). Even though Mariah had a tough time, she has worked on her mental health. Now, she is able to visit Dominic without getting any thoughts of how she should be the child’s mother.

The Young And The Restless Spoilers – Strategizing With Devon Hamilton

The Young and the Restless spoilers for the week of January 17 reveal that Mariah speaks to Devon. It is teased that Mariah will strategize with him. Many fans assume that Mariah is going to get sucked into the custody battle again. Some believe that Mariah might want shared custody of Dominic, too. However, what if the opposite happens?

It’s possible that Mariah feels she needs redemption after her obsession with Dominic. Maybe Mariah feels that Devon is going through what she did. Or, Mariah might be just trying to prove that she’s all better.

In any case, it would be too predictable for Mariah to join Devon’s custody battle. Plus, Devon and Amanda Sinclair (Mishael Morgan) “take on a new challenge” during the week of January 24. Could this mean that Devon gives up the fight?

It’s possible, although it might mean that there is a complication with the custody case. Maybe Abby and Chance make a surprising compromise. Chance’s PTSD getting worse might also be the “new challenge.”

What do you think Mariah’s purpose is when speaking to Devon about Dominic? Will she want to get shared custody, too? Or could Mariah actually try to convince Devon to give up the custody battle? Share your theories and remember to keep watching the CBS soap to see what happens next.