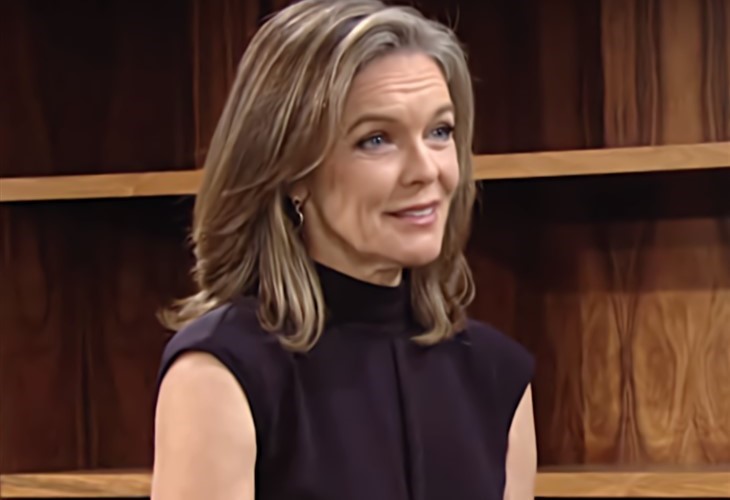 The Young And The Restless Spoilers – Diane Jenkins’ Getting Small Victories

Y&R spoilers reveal that each week, Diane seems to be getting small victories. Even though most of Genoa City doesn’t trust Diane and wants her gone, the resurrected character is sticking around. Kyle is already softening toward Diane. Jack Abbott (Peter Bergman) remains guarded but is softening toward the villain as well.

Summer and Kyle share a toast to an exciting new chapter. The couple is staying in Genoa City and plans are made for Jabot to bring Marchetti into the business fold. Even though Jack swore off the fashion industry long ago, he is making an exception.

Of course, this decision is less about business and more about keeping Summer, Kyle, and Harrison Locke (Kellen Enriquez) nearby. It is confirmed that Summer wants Kyle to be in charge once the acquisition is complete. Kyle likely accepts the position.

The Young And The Restless Spoilers – Unexpected Career Proposition

The Young and the Restless spoilers reveal that Diane’s hotel bills are being paid for by Kyle. The Abbott family has plenty of money to keep doing this forever. However, if Diane is staying in Genoa City long-term, then she will need to find a job and pay her own bills.

This is one of Nikki Newman’s (Melody Thomas Scott) points to Diane, that she is just trying to get the Abbott fortune. So, Diane might suggest to Kyle and Jack that she is going job hunting to pay her own way. Diane doesn’t really want a job but knows this will make her look better and more genuine to the Abbott family.

Kyle already isn’t happy about Nikki slapping Diane, even though he doesn’t know the full story. Plus, Jack mentioned to Diane that things are not going to get easier for her for quite some time. So, Jack and Kyle could feel bad for Diane. They might know that Diane will have a hard time finding anyone to hire her. So, perhaps Kyle offers Diane a job at Marchetti/Jabot.

Jack just might support this idea. For Summer, she could also be on board with the career proposition. For Summer, it might be more about being able to keep a close eye on Diane, though.

If Kyle offers Diane a job, this will only further infuriate Nikki, Victor Newman (Eric Braeden), Phyllis Summers (Michelle Stafford), and others. It could reignite former feuds as well as start some new ones.