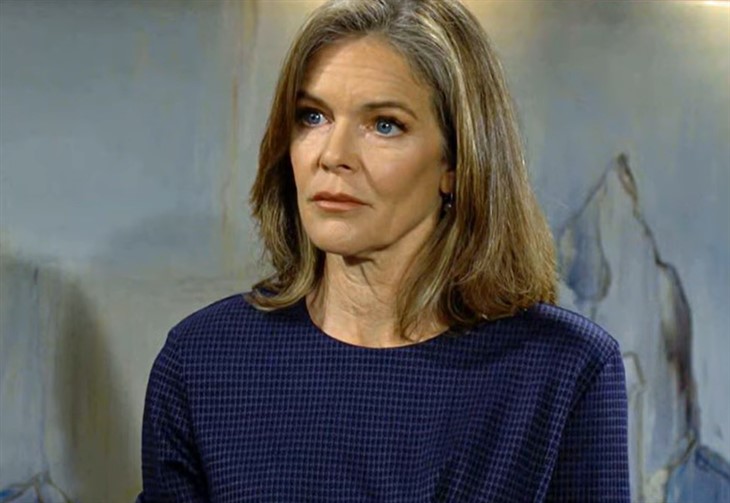 The Young and the Restless (Y&R) spoilers document that Diane Jenkins (Susan Walters) achieved her third needed step. After revealing her existence to Jack Abbott (Peter Bergman) in Los Angeles, California, and getting him to facilitate a meeting, she met with their son.

Kyle Abbott (Michael Mealor) is dealing with the shock of learning that the mother he thought was murdered, is still alive. Kyle opened the door to Diane at the Abbott family mansion, which was his turf as Jack said.

But Kyle is no longer the little boy Diane abandoned when she pulled her death ruse with Deacon Sharpe’s (Sean Kanan) assistance. He is married and has a child, Harrison Locke Abbott (Kellen Enriquez). That reality makes Kyle’s eventual decision far more complex.

The Young And The Restless Spoilers – The Undead In Genoa City, Wisconsin

Many people detested Diane all those soapy years ago. So, her murder was big news. Few, except for Kyle, missed Diane when she was gone.

Soap opera fans suspend disbelief to allow new story lines to be told. Such is the case in what would otherwise be thought of as a preposterous development.

How could someone who Nikki Newman (Melody Thomas Scott) bludgeoned with a rock in the park have survived? Beyond that, how did Deacon pull off a master deception that went unsolved? Well, daytime is about incredible drama, and the show goes on.

Diane was a good mother to Kyle. His vivid memories are not false, which will likely allow him to soften as episodes flow through the spring.

She was obviously in a frazzled state of mind at the time, as her choice to leave town in such a dramatic fashion underscores her claimed mental instability. If she is telling the truth about having sought therapy, Diane can provide whatever documentation Kyle may want to see.

Assumed therapy would also lead one to believe that Diane is being honest about wanting to maintain her supposedly regained stability. But it is a long road from her claim to Kyle being willing to trust her again.

Diane missed a lot since she voluntarily left Kyle. He is moving toward middle-age, is married to Summer Newman Abbott (Allison Lanier), and has a child, Harrison.

Enriquez’ character will be key to Kyle’s decision-making process. While Summer’s voice will be influential, Kyle must decide if he wants his son to have a connection to Diane.

Harrison is someone Kyle loves with his whole heart. He does not want his son or his wife to be endangered by anything Diane may attempt in the future. So, Walters’ character faces an uphill path to restoring family ties on Y&R.

Y&R Spoilers: Abby Not Backing Down? Believes She Can Win Chance Back?