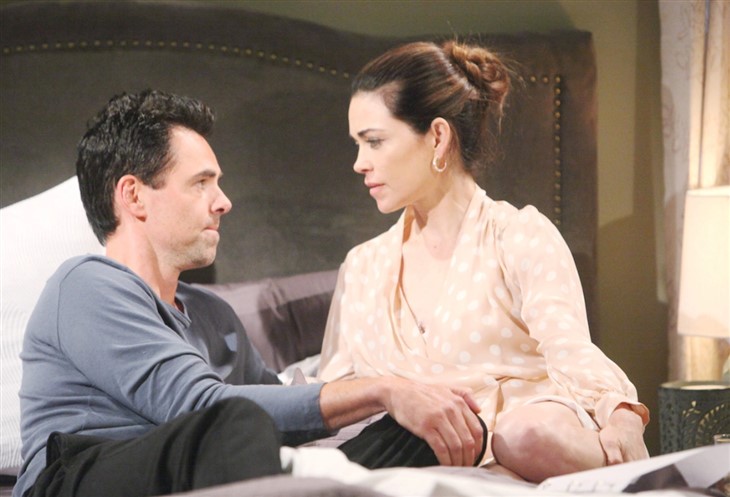 The Young and the Restless (Y&R) spoilers reveal that Victoria Newman (Amelia Heinle) is finally free of the Locke Ness Monster, but getting rid of her bad habit of choosing the wrong men will not vanish as easily.

She and Billy Abbott (Jason Thompson) have a long history and when the chips are down she has gone to him him for comfort more than once. Right now she should be thrilled that Ashland Locke (Robert Newman) is out of the picture, but she will feel a mix of powerful emotions that could lead her straight to Billy Boy. If so, where does this leave Lily Winters (Christel Khalil)?

Victoria has not lost all hope in the father of children and he does seem to be on the right path now that he is doing his silly mopey podcast instead of trying to adult in the corporate world. Ashland is the second ex who has tried to kill the brunette vixen, but at least Billy can say that he never stooped that low. Sure, he’s cheated on Victoria and got her kidnapped due to gambling debts, but kill her? Never!

That is a pretty low bar, but Victoria is at a very low point in life at the moment. Billy will want to make sure that Victoria is ok after he hears about the terrible news that Ashland is dead.

The Young and the Restless spoilers tease Victoria is a hot mess after all that she has been through with Ashland. If Billy allows it, and why wouldn’t he, she may pour her heart out to Billy. Because he’s screwed up so many times he is not likely to judge her and say, ‘I told you so.’

Instead, fans can look forward to Billy offering his shoulder, support and comfort to Victoria during the week of August 1-5.

The Young And The Restless Spoilers – Villy Back On Track?

Will Victoria tell Billy the whole story, about how her brother Nick Newman (Joshua Morrow) caused Ashland to fall and hit his head on her fireplace? If so she will be indebted to him and he will be bound to keep her secret. That could create a powerful bond between them. This present day secret, combined with their stupendous past could be what it takes to reunite Villy.

Billy is as committed to Lily Winters (Christel Khalil) as he’s ever been, but that isn’t really saying much!