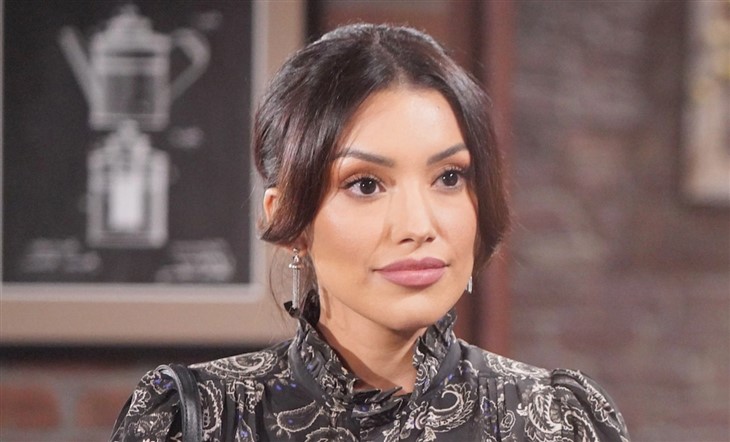 The Young and The Restless spoilers and updates tease that Audra Charles (Zuleyka Silver) could be plotting a pregnancy trap for Noah Newman (Rory Gibson). She may be intending to seduce him so she can get him to dump Allie Nguyen (Kelsey Wang) and marry her.

An unplanned pregnancy, or a fabricated one, is the oldest trick in the book for a conniving young woman to snag a young man into a marriage. Audra seemed sincere when she told Noah about having miscarried his child back in London, and definitely gained his sympathy. But there’s a good chance that even that was a fairy tale, but it certainly worked to get a door back into Noah’s heart-or she thinks.

It’s going to take more than crying over a past miscarriage, if it even happened at all, to get Noah back. He and Allie seem pretty solid, and The Young and the Restless spoilers Allie offered him her support when he told her what he’d learned from Audra.

Audra doesn’t seem to be legitimately in love with Noah, it seems more like a scary obsession with him. She dogs his every step and has a definite stalker vibe going on and it’s not been escaping his notice. He even accused her of stalking him and tracking him down in Genoa City when she first arrived, even though she seems to have a legitimate job. She’s actually working for Tucker McCall (Trevor St. John) so perhaps “legitimate” isn’t the best description of what she does. The best way to break up him and Allie and try to get him back is to seduce him, whether a pregnancy actually occurs or not, she could always fake it.

The Young And The Restless Spoilers – Desperate Moves

Audra could definitely make some desperate moves towards Noah and getting him into bed with Allie catching him would be just her style-Audra’s dangerous under the surface. That would be the quickest and easiest way to break them up, but would it snag Noah for her? Perhaps not – maybe a better way would be to get him in bed and use his guilt as bait when she produces a faked positive pregnancy test.

That would put Noah in a terrible position of having to admit his indiscretion to Allie, which would be a fatal dagger to their relationship. Then, after Audra convinces him to do the right thing by her and marry her, she would next fake another miscarriage; after all, she’s already set the stage for that.