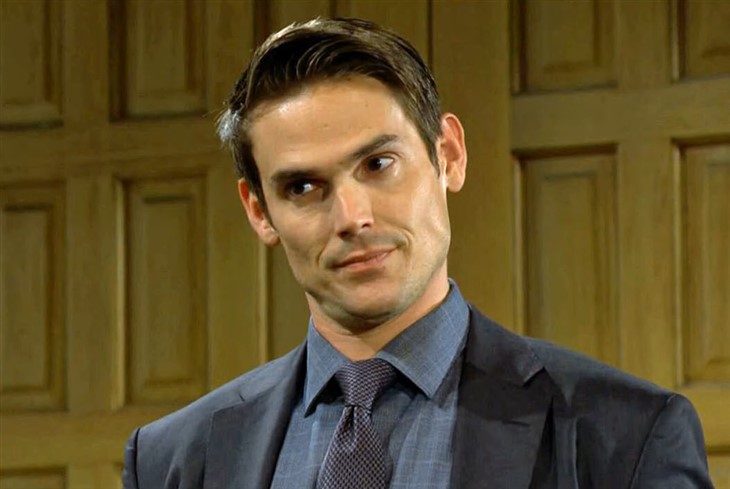 The Young and the Restless spoilers document that Adam Newman (Mark Grossman) believes he is making choices that will stabilize his life. He has accepted a new job that trades family drama for an opportunity to apply his business acumen at Jabot.

Adam also admitted that he was wrong and still loves Sally Spectra (Courtney Hope). Her response led him to conclude what the audience did. This brief couple seemed to be back on track, with a restoring and deepening of their relationship ahead.

But daytime being about drama, Sally and Nick Newman (Joshua Morrow) are teased to romantically connect at Newman Media behind a locked door.

According to The Young and the Restless spoilers, Adam goes to Sally’s office, expecting to build off their apparent breakthrough conversation at the Genoa City Athletic Club’s rooftop pool bar. The last sentence was a long way to go, winking at the leap Adam seemed to make from goat to gloat.

Nick’s presence in Sally’s office would, in itself, not be an issue. He is Victoria Newman’s (Amelia Heinle) Chief Executive Officer. So, stopping in to discuss whatever progress Sally and her team is making would make sense.

But Nick and Sally were involved in personal business when Adam arrived. Thankfully, the door was locked.

To think that one of the most powerful men in the world, Victor Newman (Eric Braeden), would micromanage the head of one of his divisions in a worldwide conglomerate is generally preposterous.

But the Moustache is a control freak who does not trust Sally. Victor does have good instincts in some regards. So, it could be that he sensed Sally might shift her gaze to Nick.

Well, the above happened, whether Victor was anticipating it or not. His choice to supplant Sally is Nick. Victor has the power to get rid of Sally. Doing so could put her in conflict with Nick and allow her to solicit Adam’s advice about whether he was involved in sinking her.

Working for Newman Enterprises is a high-risk, limited reward proposition. Many have learned that lesson through the decades, especially Victor’s children.

For the moment, Nikki Newman (Melody Thomas Scott) has avoided her husband’s wrath. She could be forced out if Victor invents some reason for doing so.

But in the meantime, Nick is the most likely Newman family member to tangle with his father. Victor wants Sally out. Nick finds Sally to be impressive and will defend her. Such is good soap on Y&R.