The Young and the Restless Spoilers: Sally Not Fooled, Refuses to Accept Breakup 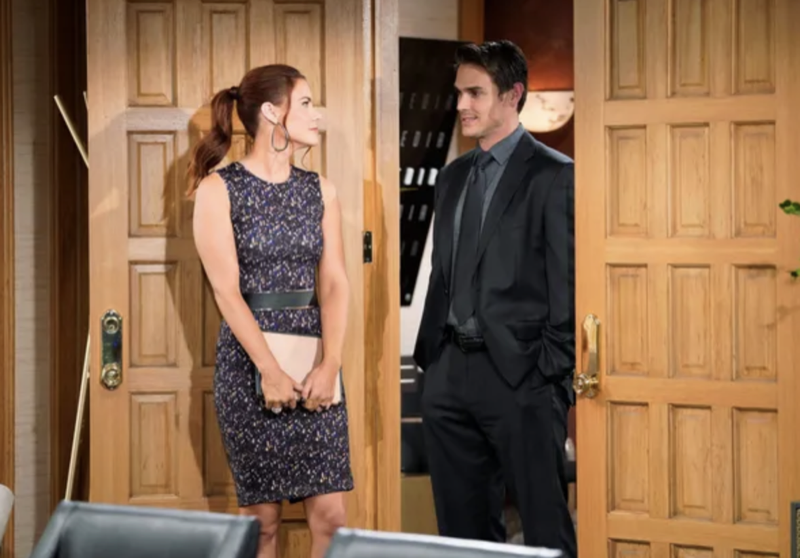 The Young and the Restless spoilers for the week of July 18 reveal that Adam Newman (Mark Grossman) knows that Sally Spectra (Courtney Hope) will suffer with Victoria Newman (Amelia Heinle) in charge. In order to save Sally’s job, Adam breaks up with her. However, Sally doesn’t buy it and refuses to accept they are over. This forces Adam to be cruel to the woman he loves.

Y&R spoilers reveal that when Victoria was handed back the reins at Newman Enterprises, Adam quit Newman Media. However, Adam already knows that Victoria isn’t going to want to keep Sally in the CEO position. Victoria wanted to let Sally go completely but Victor Newman (Eric Braeden) said she could still be useful.

Sally was hoping the press conference would give her an idea of where her job stands. Victoria wouldn’t give the press any answers about Sally’s future, though. Adam even tried to tell Victoria that he broke up with Sally. It’s doubtful that will change Victoria’s mind, though.

After Victoria told her family about Adam’s split, Sally mentioned to Chloe Mitchell (Elizabeth Hendrickson) that her boyfriend was MIA. Even though Sally is concerned, she will hear from Adam soon enough.

According to Soap Opera Digest, Adam tells Sally that they need to part ways. Of course, this completely blindsides Sally.

The Young and the Restless spoilers reveal that Adam puts on his macho man act in an attempt to push Sally away. Sally is stunned and heartbroken at first but then soon realizes Adam is just trying to protect her. Even though Adam has good intentions, Sally will try to reason with him not to follow through.

Adam can see how much confusion and pain Sally is going through. It kills Adam to see Sally hurting but truly thinks this is the best way to save her career.

The Young and the Restless Spoilers: Being Cruel

In the weekly preview clip, Adam sticks his finger at Sally’s chest while brutally telling her why they have to break up. Adam claims that Sally is standing in the way of everything he wants. The pain on Sally’s face is clear and the tone of Adam’s voice is absolutely cruel. Grossman told SOD,

“To really sell it, he has to be cruel to her. She has to believe that this breakup is genuine so he becomes a real son of a b**ch. He claims that his father doesn’t respect him anymore because of Sally…. Seeing her in this much pain affects Adam and he begins to waver. Now he has to decide if he should end the charade or stick to his guns.”

B&B Spoilers: Taylor and Ridge Hook Up In Monaco, Brooke Gets Her Comeuppance?