The Young And The Restless Spoilers: Diane Hailed A Hero After Harrison’s Illness 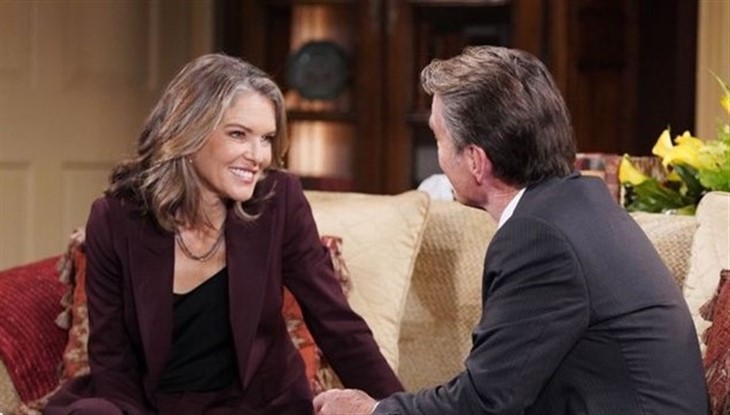 The Young and the Restless (Y&R) spoilers tease that Diane Jenkins (Susan Walters) will be a hero to Harrison Locke (Kellen Enriquez) after she discovers the little boy is running a fever and sick. She immediately calls Kyle Abbott (Michael Mealor), Summer Newman Abbott (Allison Lanier), and Grandpa Jack Abbott (Peter Bergman).

On Monday, November 7, Kyle suggests that he and Summer take the tot to the doctor and will keep Diane and Jack updated on what the doctor says. However, Harrison objects and wants his grandma DiDi (Diane) to go to the hospital with him. Summer bows out and allows Diane to go with Kyle to the hospital. Jack gives Summer a ride to Jabot, giving Diane time to talk to Kyle without interference.

After Harrison returns from the hospital, Kyle and Diane have a heart-to-heart. He tells her about his childhood memory when he had mono and was lonely without her. He never wants his son to have that feeling, so if she doesn’t want to stay present in his life for good, she should see herself out of it.

According to Y&R spoilers, Diane pleaded with Kyle, feeling remorseful that he ever had to feel like he didn’t have anyone as a child. She swore she wanted to be an active part of Harrison’s life and his. Kyle seemed to buy Diane’s spiel and said he wanted her to prove that she was genuine.

Summer cannot understand how Jack and Kyle believe this innocent act of Diane’s. She realizes Kyle has missed having a mother, but she doesn’t think Diane is being honest about wanting to be a part of his life. Summer believes Phyllis Summer (Michelle Stafford) is right about Diane –she’s only back in Genoa City to win Jack Back. It has little to do with Kyle or Harrison.

Phyllis is on a mission to oust Diane and won’t rest until she packs her bags with a one-way ticket out of Genoa City. She wants to send Diane packing so severely, but Jack will struggle to see the evil in Diane. Jack seems to trust Diane more than he should, considering her past. Kyle and Summer will probably have marital tension over Jack and Kyle’s support of Diane.

Will Phyllis find something to send Diane out of Genoa City? Will Summer take her mom’s side and help her dig up some dirt on Diane? This site is a leading source for everything linked to The Young and the Restless. Check back regularly for Y&R spoilers and news!