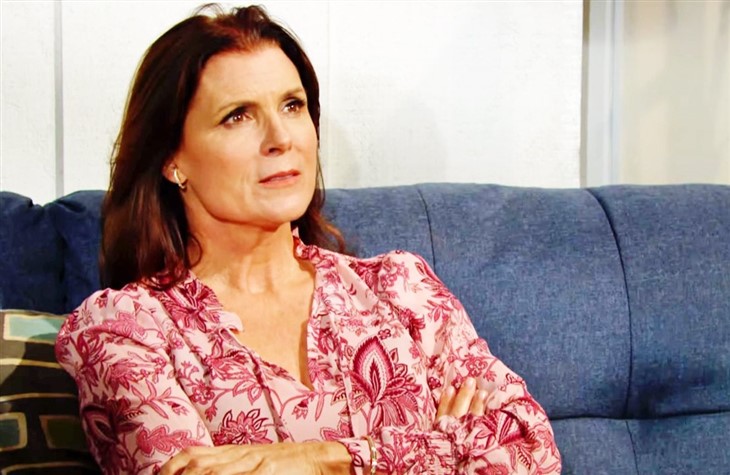 The Bold and the Beautiful spoilers for September 12-16, 2022, reveal Sheila trying to take what isn’t hers and Liam trying to keep what he thinks is his.

No, Sheila Carter (Kimberlin Brown) is not going to shoot her own child and leave him for dead this time. Instead, she is going to sneak right into the grown child’s home when nobody is looking and lift up her baby grandson like a prize. She can’t believe she is holding him again and Deacon Sharpe (Sean Kanan) can’t believe the mess he has gotten himself into.

Thankfully, he knows what Sheila has in mind so he manages to stop her from taking Hayes, but he has a very hard time talking her out of the idea that this was the last time she would try that. Nope, Sheila doesn’t give up that easily.

Liam Spencer (Scott Clifton) is just about done with Thomas Forrester (Matthew Atkinson) and this idea that he can just waltz into his little log cabin and take his son back. What blasphemy!

So, Thomas has to hear when Liam puts him on notice. Liam knows in his gut that Thomas is only doing this to get Hope Logan Spencer (Annika Noelle) back and Liam is not going to give up on his family without a fight. Too bad for Liam, neither is Thomas.

The Bold And The Beautiful Spoilers – Other B&B Happenings

Paris Buckingham (Diamond White) makes it back on screen after her terrible heartbreak with Carter Walton (Lawrence Saint-Victor). She seems to be firmly with Zende Forrester (Delon De Metz) again and even has a new job when she becomes the model for Zende’s latest design line. How convenient for Perfect Paris!

Ridge Forrester (Thorsten Kaye) has decision-making to do as always and surprise surprise, it all has to do with Brooke Logan Forrester (Katherine Kelly Lang) and Taylor Hayes (Krista Allen). He just can’t make up his mind between these two women so it’s been the same song and dance for decades.

It’s a good thing Steffy Forrester (Jacqueline MacInnes Wood) seems to have made up her father’s mind for him when she once again declares that he has to be with Taylor. Stay tuned to The Bold and the Beautiful weekdays to see how these stories play out.