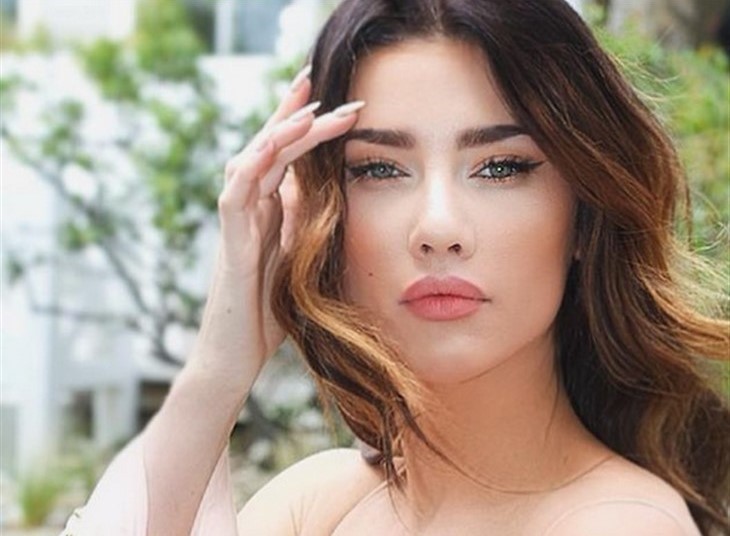 The Bold And The Beautiful spoilers reveal that Steffy Forrester Finnegan (Jacqueline MacInnes Wood) will finally reunite with John “Finn” Finnegan (Tanner Novlan). But can Finn find Steffy in Monte Carlo? And if and when he does, how will the troubled young woman react?

Find out what Jacqueline and Tanner shared when they recently appeared together on The Talk. From why Steffy fled Los Angeles to Finn’s sense of urgency, both teased the future of SINN on The Bold And The Beautiful. Get all the details below.

Jacqueline MacInnes Wood’s and Tanner Novlan’s visit to The Talk on Friday marked the first time the two had gotten together since Sheila Carter (Kimberlin Brown) took aim in an alleyway. But the separation didn’t stop the actors from dishing up details of their time filming Bold And The Beautiful on location in Monte Carlo, noted Soap Opera Network.  And the two agreed that fans will love every aspect of the reunion between Steffy and Finn.

But first Wood set the stage for how Steffy feels before the reunion. “Steffy is heartbroken. She’s grieving. She has to try to move on with her life and try to heal,” pointed out Jacqueline. As a result of her unhappiness, Steffy feels as if she can no longer live in Los Angeles.

And Wood also pointed out that Steffy fled California because wherever she looked, she got reminded of Finn. Worried about raising their son on her own, Steffy feels “truly broken,” added Jacqueline. As a result, Steffy heads to Monte Carlo. And she seeks to “move on the best way she can” in that lovely location, noted Wood.

However, Tanner offered a very different perspective. And Novlan pointed out that Steffy’s past makes Finn’s quest to find her even more urgent. “It’s nice to see that Steffy is kinda mourning because usually she kinda takes off with another man,” noted Tanner. “So I think Finn’s like, ‘I gotta get to Steffy in a hurry, you know what I mean? We got a reputation around here!’”

However, Novlan got serious when he reflected on Steffy’s and Finn’s love. “But no, their love is so deep and so connected,” added Tanner. “And I think they have a really mature relationship and he’s doing everything he can to get back to his family.” And he summed up the reunion scene as “epic.”

Both Tanner and Jacqueline expressed enthusiasm about that reunion. And he even offered an impressive prediction. “This’ll be one of the ones that I think they play the reels and the highlights over the years. It’s so good,” he gushed.

And Wood agreed. Looking at how Steffy and Finn finally will come together again, Jacqueline shared, “It’s romantic, it’s passionate and raw too. There will be real emotions so the SINN fans will be so excited to see how we reunite.”

Tell us what you think. Are you looking forward to seeing Steffy and Finn reunite? You can watch their appearance on The Talk below. And after you share your views, check back on our site for more Bold And The Beautiful news!