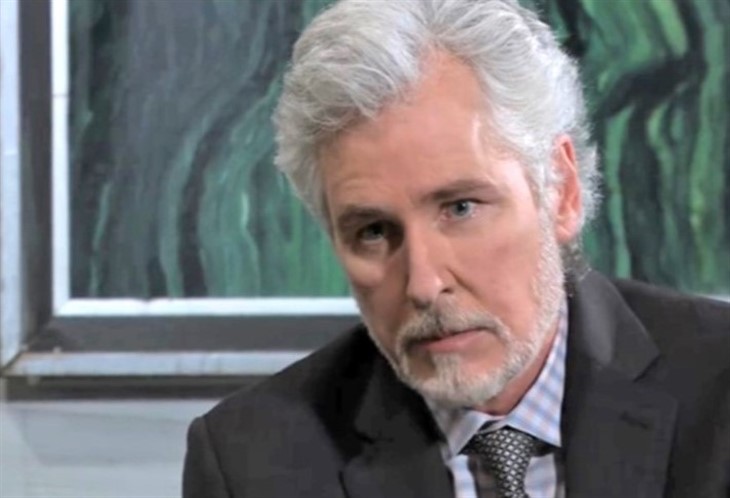 General Hospital (GH) spoilers and updates for Tuesday, May 3 tease secrets to reveal, decisions to make, and excuses to explain on the next GH!

Martin Grey (Michael E. Knight) is back on Tuesday’s GH, and Lucy Coe (Lynn Herring) is really glad to see him! It has been a long time since she’s seen her secret lover Martin, and he has finally returned to Port Charles. Lucy’s standing at the door in a black fur coat, and he must be asking her if that fur coat is hot!

Lucy has a hot surprise for Martin as she drops her fur coat to the floor and tells him it’s going to get hotter! Lucy’s accidentally been caught in her undies at more than a few Nurses’ Balls in the past, but this time she’s in her birthday suit!

At the Savoy, Austin Gatlin-Holt (Roger Howarth) and Maxie Jones (Kirsten Storms) are seated together having a meal at a table at The Savoy. Viewers will recall that they made another date after Maxie seemed to make excuses in the previous GH episode. Maxie glares at Austin with a very serious look on her face from across the table which might be giving him the impression she’s got better things to do! No wonder Austin’s insecure and accuses her of looking for an excuse to push him away, but is she, or doesn’t he understand her schedule? Will these two ever get on the same page and both understand which page they are on?

General Hospital Spoilers – I Will Do What Has To Be Done

Valentin Cassadine (James Patrick Stuart) is also back in Port Charles, and he is having a serious conversation with someone on the phone! Valentin tells someone that he will do what has to be done – might that be concerning Martin and Lucy canoodling behind his back again? Previous GH episodes revealed that Valentin had threatened to fire Martin as his attorney if he didn’t break things off with Lucy!

They will have to defend their relationship to Valentin and their right to having a romantic relationship with each other. After all, they are two consenting adults and there doesn’t seem to be any conflict of interest or company rule against fraternization!

GH Spoilers – Time To Hang Up The Stethoscope

At General Hospital, Michael Corinthos (Chad Duell) talks to Dr. TJ Ashford (Tajh Bellow), whose patient is Harmony Miller (Inga Cadranel). There is no doubt that Harmony’s case is a tough one for TJ, since all the needed surgeries could not be completed due to her blood pressure dropping too low. Harmony has several major organs damaged and for now, the plan is to keep her stable until they can possibly try again to repair the rest of the damage. Michael seems to be addressing the elephant in the room called taking her off life support. TJ says if he has to cross that line, it’s time for him to hang up his stethoscope – he’s not giving up that easily!

Sonny Corinthos (Maurice Benard) and Nina Reeves (Cynthia Watros) continue their conversation at a table at The Savoy. Viewers will recall that Nina was left alone after Liesl Obrecht (Kathleen Gati) left for a date with Scott Baldwin, (Kin Shriner) and Britt Westbourne (Kelly Thiebaud) left for GH. It sounds like Sonny might be talking about Michael’s disowning himself for the second time, the first time being when he shot and killed his birth father.

GH Spoilers – Whatever It Is, Just Tell Me!

At the hospital, Carly Corinthos (Laura Wright) stands with Michael and Willow Tait (Katelyn MacMullen) in front of Harmony’s room in the intensive care unit. Harmony is on life support with a machine doing her breathing, and Carly having pressed her to tell the truth. Willow is understandably upset, knowing Carly knows a secret that Harmony was willing to kill to protect, and Carly is probably waiting on Harmony to tell her! Willow, distraught, cries to Carly that whatever it is, to just tell her!

General Hospital Spoilers – Getting A Room At The Metro Court Didn’t Stop The Problem!

Recently, Elizabeth Baldwin (Rebecca Herbst) moved out of her home and booked a room at The Metro Court for safety reasons. Security cameras, Harrison Chase, (Josh Swickard) and a Port Charles Police Department patrol hadn’t stopped the strange Franco Baldwin (Roger Howarth) related incidents. Hamilton Finn (Michael Easton) booked a room next to Elizabeth’s, and she’d rather she and her boys could go back home.

However, it’s obvious that the stalker has followed to the Metro Court as she stands in towel wrapped hair and a bathrobe, screaming “FINN!!!!!!” Elizabeth had worried when Finn booked a room next door to her because Franco’s ghost appeared to be jealous!

B&B Spoilers: Hope Is Ready To Lose It Already