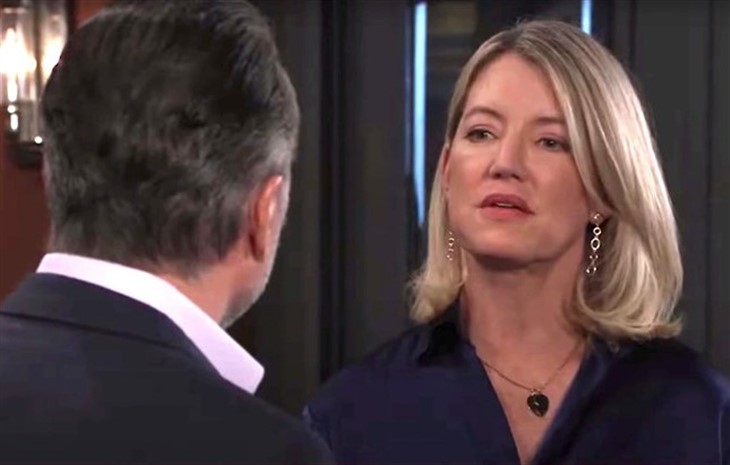 General Hospital (GH) spoilers tease that wedding bells will be ringing when (if?) Sonny Corinthos (Maurice Benard) marries Nina Reeves (Cynthia Watros). Let’s unpack what could happen in the coming days and weeks as springtime is in the air and thoughts turn to love.

Nina Reeves and Sonny Corinthos kinda sorta met via Phyllis Caulfield (Joyce Guy) in Nixon Falls. Sonny had amnesia and thought he was “Mike.” Nina knew who she was.

But when she tried to tell his wife Carly Corinthos (Laura Wright) the nasty lady rained down wrath on Nina who then kept her secret to herself. She went on to grow fond of Mike and vice versa, and these two had all kinds of adventures in the little out-of-the-way bar, The Tan-O, run by Phyllis and her late husband Lenny Caulfield (Rif Hutton).

But all good things must come to an end and in the end, Sonny regained his memory, spat nails at Nina, and tried to reconcile with Snarly. Despite the fact that he ran in on her just as she was about to consummate her honeymoon to their best friend, Jason Morgan (Steve Burton), Sonny forgave and forgot.

Now, Nina is realizing that Mike and Sonny are not one and the same—they are kind of like a swirl of chocolate and vanilla froyo—where does one start and the other begin?

CarSon are now divorced and Nina is having buyer’s remorse? Sonny is the kind of guy who just kidnapped a young girl off the street, had her brought to his lair, and tried to break her down like a street thug. Evil teen Esme Prince (Avery Pohl) deserved it, but still—who does that?

So this is the guy Nina is facing—a stone-cold mobster, not the flannel-loving PA guy who liked to twirl her around the sawdust bar floor.

But explosive show spoilers reveal that Nina could soon be the subject of Harmony Miller’s (Inga Cadranel) wrath—will Sonny propose to Nina after she has a near-death experience? Not if Michael Corinthos (Chad Duell) has anything to say about it!