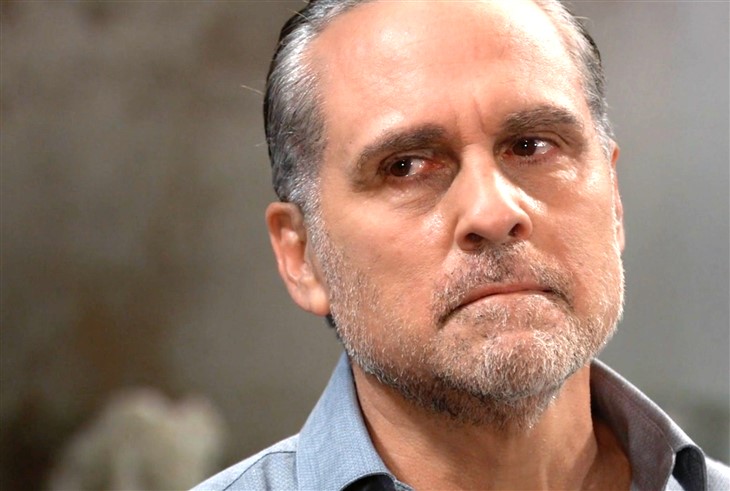 General Hospital (GH) spoilers and rumors tease that Sonny Corinthos (Maurice Benard) and Marshall Ashford (Robert Gossett) seem to know each other; or at least about each other. Could future General Hospital episodes reveal that Marshall played music in Sonny’s club back in the day?

General Hospital viewers will recall from a recent episode of General Hospital, that even though Marshall doesn’t seem to trust Sonny, Sonny has no problem with him, especially not after seeing he’s on medicine that is used for bipolar disorder and schizophrenia. Avery Jerome-Corinthos (Ava and Grace Scarola) had injured her arm, and Sonny and Ava Cassadine (Maura West) had brought her to General Hospital and TJ Ashford (Tajh Bellow) had treated her for a sprain.

Marshall saw it and warned TJ not to trust Sonny and had warned Sonny to stay away from his family, but then after Avery arm was treated she ran out of the examining room and collided with Marshall, making him drop his empty bottle! It had rolled towards Sonny and he stopped it with his foot, seeing it was a prescription for Risperidone – he then said he had no problem with Marshall-still, both of them have seen each other in other situations with a hint of recognition.

One thing that has been revealed about Marshall in recent General Hospital episodes is that he is a musician, and played jazz clarinet for many years. General Hospital viewers will remember Stella Henry (Vernée Watson) verifying that, but she seemed to have a rather disdainful attitude towards music as a living; she seems to be one who would tell a musician or artist to get a “real job”!

Longtime General Hospital viewers will remember that Sonny ran a club many years ago, and later ran the same club with Luke Spencer (Anthony Geary). The Paradise Lounge, under Sonny’s ownership only had been a strip club, and later Luke went in with Sonny to form Luke’s Blues Club, where Mike Corbin (Max Gail) worked for many years. Luke’s Blues Club focused more on music, and booked many rhythm and blues and jazz groups – it’s possible that Sonny and Marshall remember each other from back then and Marshall used to play there.

General Hospital Spoilers – Why Does Marshall Ashford Think Sonny Corinthos Is A Danger?

General Hospital viewers wonder why Marshall thinks Sonny is a danger and he worries about a danger still being “out there” and that’s why he doesn’t want to talk about his past. General Hospital viewers recall that Curtis Ashford, (Donnell Turner) went to Sonny to dig into Marshall’s past and Sonny wanted to know why he thought it was his business! Curtis had gone to the PCPD to see if Jordan Ashford (Tanisha Harper) would unseal the criminal records that Marshall had admitted he had, but she refused, so he had gone to Sonny. But with this new information that Marshall is on a medicine that is used for both bipolar disorder and schizophrenia, now called schizoaffective disorder, there is a good possibility that the danger Marshall is afraid of could be merely paranoia!

Y&R Spoilers: Phyllis And Lauren Are Afraid For Jack And Michael