GH Spoilers: Portia’s Difficult Question For Curtis, She Needs To Know The Truth 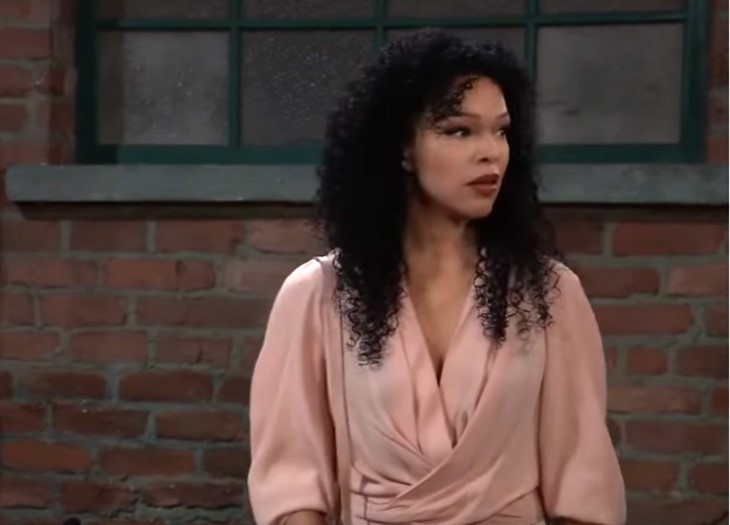 General Hospital (GH) spoiler and updates tease in this week’s Sneak Peek that Portia Robinson (Brook Kerr) will ask Curtis Ashford (Donnell Turner) a difficult question. She’ll ask him if he and Jordan Ashford (Tanisha Harper) would still be together if Jordan hadn’t lied to him and he’ll have to give her reassurances.

Portia and Curtis appear to be in her office at GH as they talk about Jordan and Curtis’ divorce dilemma, and Portia asks Curtis some difficult questions. She wants to know if Jordan had always been honest with him and if she had told him about everything, if the two of them would still be together. Curtis could almost seem evasive as he tells Portia, but she didn’t, referring to Jordan being honest with him.

Curtis asks Portia what does it matter, and Portia says she thinks it does matter, getting a little frustrated with Curtis as he doesn’t seem to understand. She asks Curtis to humor her and answer her questions, please, he says of course.

Portia tells Curtis that she realizes that he might think her questions are silly, but whatever, and continues to ask them. She stammers just a little bit as she says she needs to know this, because it’s very important to her, and Curtis attempts to reassure her. He tells her that Jordan and he may still be legally married on paper, but they hadn’t lived their lives together for over a year now. Portia becomes a little bit exasperated and tells him that’s not what she’s worried about. Curtis asks her then what is she worried about, and she doesn’t answer, she just looks like she’s going to cry.

Curtis will try to reassure Portia by telling her that they will still get married, and he’d already discussed filing new divorce papers with Jordan. Granted, he too is a little worried that she may delay the process again, thinking that she may still have a chance to repair their marriage. Curtis will likely tell Portia that even if Jordan did employ delaying tactics again, he was not taking no for an answer and would push hard for a divorce.

Portia wonders if she’ll delay the divorce as well, worried that Jordan still has feelings for Curtis and that’s why she would delay. Curtis will get the truth out of Jordan if he has to but he won’t back down on divorcing her and marrying Portia. Be sure to catch up on everything happening with GH right now. Come back here often for General Hospital spoilers, news, and updates.

Days Of Our Lives Spoilers: Xander Uses Jack To Get Sarah Back, Sells His Soul To The Devil?