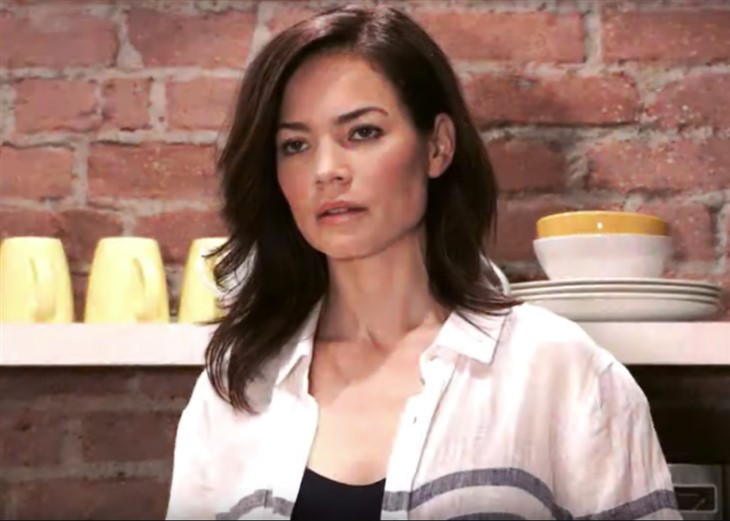 General Hospital spoilers suggest that Liz Baldwin (Rebecca Herbst) could take a near-fatal tumble down the stairs which could bring back memories of her past. Something drastic happened in Liz’s past that is causing her present issues. Will Liz finally get to the bottom of things?

General Hospital spoilers reveal that Liz will turn to Kevin Collins (Jon Lindstrom) for help. Liz is still losing time and still not remembering what happened in her past. Liz is afraid she might hurt one of her friends or even family. Liz has already attacked Harrison Chase (Josh Swickard). Could Liz attack one of her kids?

In Liz’s flashbacks, she is obviously telling someone to stay away from her father. However, Liz doesn’t acknowledge who the person is or what they want with Jeff Webber (ex-Richard Dean Anderson). Who is this person that Liz so desperately wants to leave her father alone? Could this person be tied to Jeff?

During the week of September 19-23, it seems that Liz will become a victim of a violent crime. Could the hook attacker come to the hospital to finish off a victim? Brando is the only person who saw that attacker face to face. However, they could be determined to take Ava Jerome (Maura West) out for good. Perhaps Liz is using the stairs to get test results, etc. and someone knocks her down the stairs.

Could Liz almost die from this fall but come out remembering what happened before? Will this fall help bring Liz back to reality and keep her family safe? Hamilton Finn (Michael Easton) will rush to save someone’s life that week, it could be the life of his girlfriend. Would saving Liz also give Finn peace about not being able to save his wife?