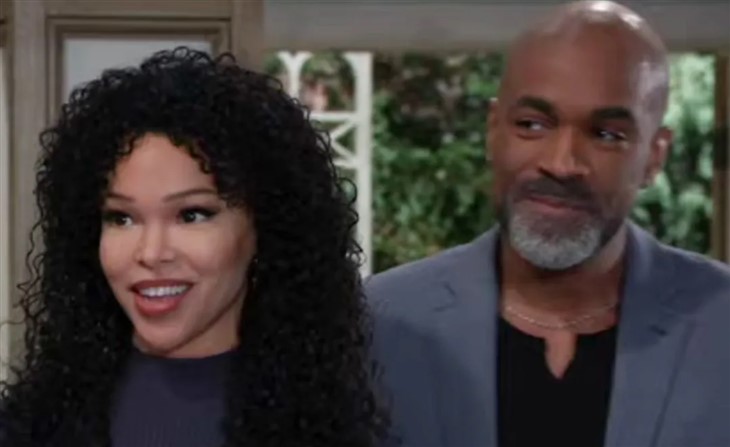 General Hospital spoilers and updates for Friday, June 3 tease there will be true and false confessions among the Port Charles residents on Friday’s GH!

General Hospital Spoilers – I Can’t Wait To See What Else

At the home that Portia Robinson (Brook Kerr) and Curtis Ashford (Donnell Turner) share, Trina Robinson (Tabyana Ali) wants to give Rory Cabrera (Michael Blake Kruse) the grand tour! She smiles at him with a look on her face that hints she might want to give him a grand tour of herself! Rory smiles at her also, as he tells her he can’t wait what else she wants to introduce him to.

There has been some steam building up between the young PCPD rookie and the Jerome Art Gallery intern for quite some time. Even when she was booked into the Port Charles Police Department jail he seemed impressed with her and brought her a soda-he’s also been working on exonerating her!

There’s awkwardness all around when Trina’s parents, Marcus Taggert (Réal Andrews) and Trina’s mother Portia show up at the door while Rory and Trina are there! Portia looks a bit mortified while Taggert grins and asks Trina who’s her friend! It’s hard to tell whether Portia is more mortified that they’ve walked in on Trina “giving the grand tour” to Rory or that she’s come to the house with her ex! Curtis is still in Brooklyn with his father, and the rest of his family waiting for Marshall Ashford (Robert Gossett) to recover sufficiently to come home! Taggert should be pleased to find out that Rory is a cop, although things could get a little complicated since Trina’s accused of a crime!

General Hospital Spoilers – Why Didn’t You Ever Mention Him To Me Before?

At Charlie’s Pub, Sam McCall (Kelly Monaco) asks Dante Falconeri (Dominic Zamprogna) about his old friend who made such a splash at the Society Setups event!  Cody Bell (Josh  Kelly) apparently was friends with Dante growing up and just happened to drop in – the swimming pool at the Metro Court! Cody seemed quite interested in Britt Westbourne (Kelly Thiebaud) although she was more interested in getting him arrested, although she’s undeniably attracted!

Sam asks Dante why he never mentioned Cody to her before, considering they seemed to be such good friends. Apparently they have seen each other as adults or they wouldn’t have recognized each other!

GH Spoilers – There’s Something I Need To Tell You-

Cameron Webber (William Lipton) needs to confess the secret that Spencer Cassadine (Nicholas Chavez) had sworn him to secrecy about; it’s making trouble between Cam and Josslyn Jacks (Eden McCoy). Cameron tells Josslyn there’s something he needs to tell her, as she looks with concern, ready to listen to what he has to say. Cameron will tell her that Spencer has been trying to find proof that Esme Prince (Avery Kristen Pohl) framed Trina for the crime’s she’s accused of. Spencer is really on Trina’s side, not against her and he’s just stringing Esme along until he finds proof that she filmed Cam and Joss in bed, not Trina! Cameron has hated keeping secrets and he has to get it off his chest!

At Wyndemere Castle, Nikolas Cassadine (Marcus Coloma) discusses the state of their marriage with Ava Cassadine (Maura West); she tells them they have to settle this once and for all! Ava is likely talking about the situation with Spencer and Esme living in the castle and her demanding them to move out – especially Esme! Cameron isn’t the only Port Charles resident feeling gulity and needing to get something off his chest – but if Nik tells Ava the truth, he might lose her for good!

Nikolas gave in to sexual neglect and played right into Esme’s hands and they had sex, nearly getting caught by Spencer and Ava when they came home! Now Ava wants to make their marriage work and Nikolas isn’t sure what to do or which way to handle this!

GH Spoilers – Your Father Reminds Me Of That

Esme may beat Nikolas to the punch as far as true confessions go, although more than likely she’ll continue her false confessions if it better serves her purpose! Esme talks to Spencer in another part of Wyndemere Castle as she tells Spencer his father reminds her of “that”– perhaps talking about something that she and Spencer did in bed? Spencer and Cameron’s previous discussion about the “plan” involved Spencer again going all in with Esme, which would mean going back to a sexual relationship with her! Could there be a who’s the daddy, daddy or his son storyline coming up?

Sonny Corinthos (Maurice Benard) found out Nina Reeves (Cynthia Watros) lost her case for visitation when Scott Baldwin (Kin Shriner) called Phyllis Caulfield (Joyce Guy). Sonny’s really worried now because no one knows where Nina is and haven’t been able to reach her! Sonny makes a call, possibly to the PCPD or his men to look for Nina, and tells the person that she might do something she’s going to regret!

Sonny had already looked for Nina in the cemetery where he was sure she’d be visiting Nelle Benson’s (Chloe Lanier) grave. He will make a discovery, possibly finding her at the cliff where Nelle died!

GH Spoilers – We Have To Take Another Step

Nina is in her car, likely much too upset to be driving, as she tells someone in the car with her that they have to take another step! It would have been a very bad idea for her to somehow sneak into the Quartermaine property and run off with Wiley, but it doesn’t look like he’s there. Could Nina have gone off the deep end and be talking to Nelle in the car with her? Might she be planning to join her at the bottom of the cliff?