GH Spoilers: Carly’s TV Interview Puts Her In Public Eye — Whose Attention Will She Grab? 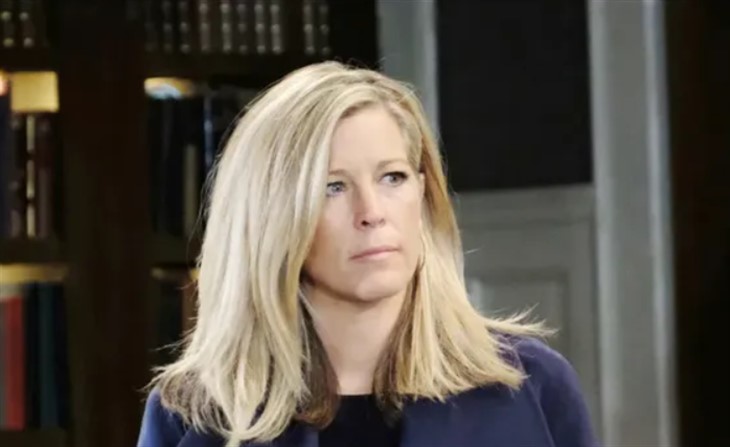 General Hospital Spoilers hints Carly Corinthos (Laura Wright) is about to get the attention of someone she doesn’t even know is out there watching. No, it won’t be the likes of your average psycho. Ryan Chamberlain (Jon Lindstrom) need not apply. This viewer already knows Carly on a very personal basis — and they’ve been on her mind, too

Carly will be approached by a local television news station soon. The news anchor will request an interview with the former mob boss’ wife turned hotelier. Will they be angling for a new story on how to reinvent yourself after divorce? Probably not. But Carly jumps at the chance to get her story out into the airwaves. What if there are other people whose family members are in the same cemetery and they have no idea what is going on?

Carly has her work cut out for her in Jacksonville, battling the Beautification Guild was the last thing on her mind before she discovered they intended to bowl over her mother’s body. Carly isn’t going down without a fight. Determined to keep her adoptive mom, Virginia Benson (Lois Nettleton) in her original final resting place, she’s taking the Guild to court.

Nevertheless, General Hospital spoilers say Carly ends up on the local news speaking out in defense of her decision to hold up the building of the new parkway. But someone out there will be watching and they’re going to come forward. Just how far into Carly’s past might this mystery viewer hail from?

GH Spoilers — A Loved One Will Be Watching

Who might be watching Carly state her case in the local Jacksonville news? It could be Morgan Corinthos (Bryan Craig) —- back from his own grave. But why would he be sitting around Jacksonville avoiding his family all of these years? Better yet —- how would he still be alive and his mother have no idea?

Perhaps it’s not her son, but the very woman she’s aiming to protect the memory of —- her adoptive mother, Virginia Benson (Lois Nettleton). If it is Virginia, where has she been and why isn’t she in her grave? If Carly is forced by the court to relocate her adoptive mom’s remains, she just may find out there was never a body there to begin with. Either Morgan or Virginia could take interest in Carly’s sudden return to Florida, but it’s too soon to say whether either of them or any other eye Carly catches may have it out for her.

Sister Wives Spoilers: Is The Network To Blame For The Brown Family’s Unraveling?