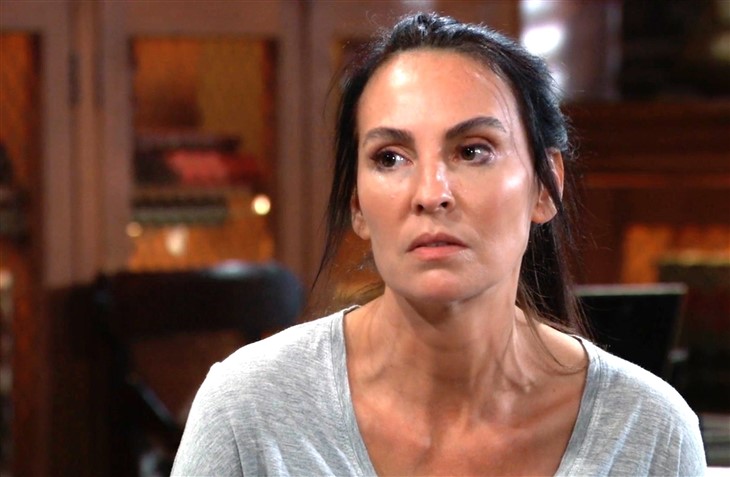 Previous episodes of GH revealed that Harmony Miller (Inga Cadranel) was killed to keep her secrets secret, after being blackmailed over them! After struggling with Brendon Byrne (Josh Coxx) she pushed him off a cliff overlooking the Port Charles harbor, where he floated up later. She then got into his room at The Metro Court and stole his briefcase containing a file on herself from Neil Byrne (Joe Flanigan).

Harmony came up with a plan to destroy the evidence, deciding to burn the file in the fireplace. As she is at Alexis Davis’ (Nancy Lee Grahn) house getting ready to burn it, Carly Corinthos (Laura Wright) shows up!

Previous GH episodes revealed Harmony had argued with Alexis earlier, in fear that Willow Tait (Katelyn MacMullen) would find out she wasn’t her birth mother. Alexis suggested that she should just tell Willow the truth, but the truth could perhaps lead to more secrets being revealed! The truth was all in the file that she had gotten her baby illegally – and was Nina Reeves’ (Cynthia Watros) another twin. Harmony is unraveling bit by bit in fear that the whole truth would come out and Willow would reject her! That’s when she decided to burn the evidence; which is the file Neil had on her-she decided that will be the end of it.

Just as Harmony got ready to burn the file in the fireplace she found that there weren’t any matches near the fireplace! She then leaves the papers on the fireplace logs and the accordion folder on the floor in front to go look for matches. Then suddenly Carly Corinthos (Laura Wright) shows up at the door and knocks loudly, calling for Alexis, who isn’t at home.

Carly starts to turn around and leave and then recognizes Harmony’s car in the driveway, and walks in the door! Harmony has just returned with the matches and has lit one as she calls her name and startles her! Harmony looks frightened and knows she has to come up with a cover story very quickly!

GH Spoilers – Sorry For The Interruption

Carly tells Harmony she is sorry for the interruption and closes the front door of Alexis’ house behind her, so far remaining polite. Carly waits at the door, hesitating to move forward as Harmony asks her to wait while she is burning a file of old personal papers. Harmony describes what she is trying to burn as old tax returns, and other papers no longer relevant, such as old bills etcetera.

Harmony tries to remain as low-key as possible and smiles at Carly as she waits on her to finish. However, by the look on Carly’s face as she stares at Harmony, GH viewers will see she’s already suspicious! Be sure to catch up on everything happening with GH right now. Come back here often for General Hospital spoilers, news, and updates.

Days Of Our Lives Spoilers: EJ Shows His Loyalty And Faith To Belle And Susan