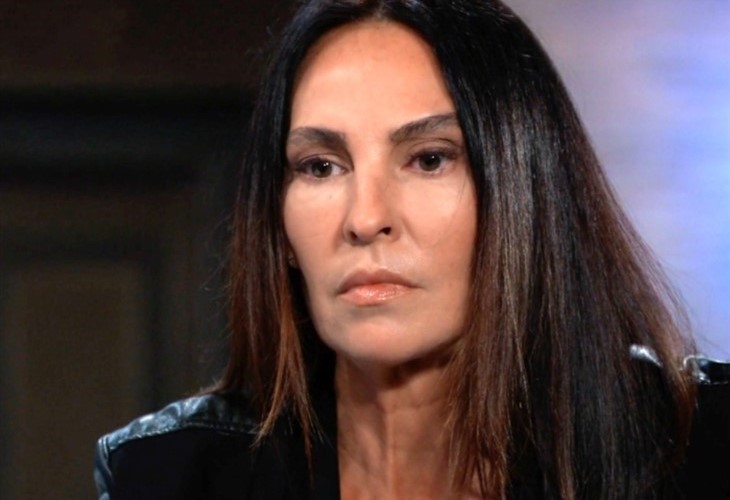 General Hospital (GH) spoilers tease that despite appearances, Harmony Miller (Inga Cadranel) is no friend to Alexis Davis (Nancy Lee Grahn). Not only did she kill Dr. Neil Byrne (Joe Flanigan) while Neil was sleeping in Alexis’ bed, but she killed Neil’s brother Brenden Byrne (Josh Coxx) as well. Alexis had the displeasure of discovering Brenden’s corpse on the pier. Not only that, but she encouraged Alexis, a recovering alcoholic, to take a drink right after she killed Brenden.

Harmony is moving heaven and earth to keep her secret. She doesn’t want anyone to know that Willow Tait (Katelyn MacMullen) is not her biological daughter, but that isn’t the biggest secret. It turns out that Harmony stole Willow as a baby from a comatose Nina Reeves (Cynthia Watros), with the help of Nina’s mother, Madeline Reeves (Donna Mills). Nina had twins after her mother had drugged her, leaving her comatose. Madeline didn’t want to share her family fortune with Nina or her children so she found a way to keep the money all to herself.

GH Spoilers – Madeline Reeves Didn’t Want To Give Up Her Fortune!

Madeline has since died, but the ramifications of her actions still reverberate in Nina’s life. Apparently, according to Phyllis Caulfield (Joyce Guy), Harmony was good friends with Madeline while Phyllis was Nina’s nurse. Harmony went by the name Lorraine Miller at the time, but Phyllis still recognized her instantly. Harmony told Neil the truth when she was seeing Neil as her therapist. Once Neil lost his license, apparently, Harmony worried that he would tell someone about Willow so she broke into Alexis’ house. She shot Neil up with heroin while he slept in Alexis’ bed.

Now that Alexis has let Harmony stay with her until Harmony could afford a place of her own, she almost slipped up when she was way too familiar with Alexis’ house for someone who had never been there. Harmony explained it away by saying she had been there when she was trying to recruit Alexis’ daughter Kristina Davis-Corinthos (Lexi Ainsworth) into the Dawn of Day cult, but ever since Alexis has remained suspicious. It won’t be long before Alexis begins to put the pieces together and realizes that Harmony not only killed Brenden but Neil as well!

Harmony’s body count is growing fast. Once Alexis figures out the truth, Harmony will certainly attempt to make her victim #3. She still has that syringe of heroin with her that she had planned to use on Brenden before they struggled and he fell. But even if she kills Alexis, Carly Corinthos (Laura Wright) is also on to Harmony and it won’t be long before she figures out that Willow is Nina’s daughter!

Will Alexis figure out how dangerous Harmony is? Will Alexis be the next victim on Harmony’s hit list? Or will it be Carly? Anything can happen in Port Charles so stay tuned to General Hospital airing weekdays on ABC. And don’t forget to check back right here regularly for all your General Hospital news, information, and spoilers!

Y&R Spoilers: Diane Wants Phyllis To Keep An Eye On Her – Jack Concerned About Kyle