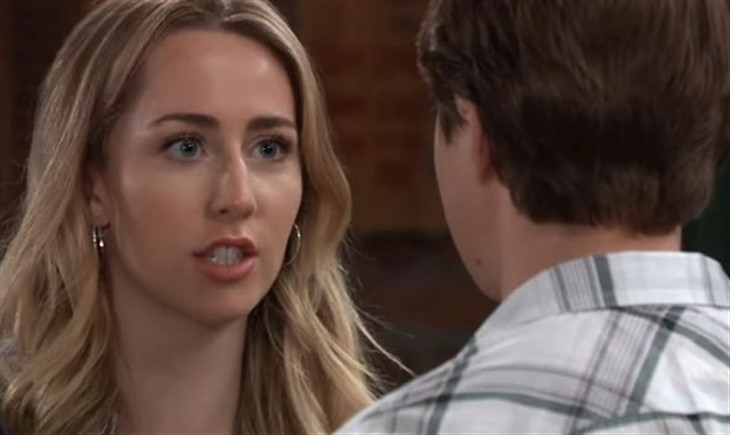 General Hospital spoilers tease that Cameron Webber (William Lipton) and Josslyn Jacks (Eden McCoy) seemed to have finally put all the obstacles between them when they finally became a couple a year or so ago. The pair even made love, a first for both of them last winter, and things probably would have continued to go well for this couple without the interference of Esme Prince (Avery Kristen Pohl). But what happened after the couple made love may very well be what ends this union, at least for the time being.

Although they didn’t know it until weeks later, Esme set up a phone to record Joss and Cam making love for the first time. Esme hated Joss for the way she treated Esme so she wanted to get back at her by hurting her in the worst way. Esme uploaded the video on the internet and if that wasn’t enough, she framed Trina Robinson (Tabyana Ali) for the crime. Trina was recently exonerated for the crime, but Joss and Cam haven’t been intimate since.

After having her first time being made so public, it’s no wonder that Joss would struggle with intimacy issues now, especially with Cameron. What happened to both of them was a terrible invasion of privacy. It’s likely something that both of them will be reminded of every time they are alone together. This couple may not ever be able to get that level of comfort back, at least not with each other.

Lately on General Hospital, Josslyn has been spending quite a bit of time with Dex Heller (Evan Hofer). They even shared a physically close moment inside a garbage dumpster while looking for a missing bracelet. Joss decided to keep the fact that she was with Dex at the time from Cameron when she recounted the story. Joss obviously thinks there is something between herself and Dex or she wouldn’t have kept Dex’s name out of it. The physical attraction between them may be exactly what Joss needs to move on with her romantic life, even though that means Cameron will likely not be a part of it.

G Spoilers – What Do You Think?

Do Cameron and Josslyn belong together? Did Esme’s evil plot ruin their romance? Is Joss more suited to Dex? Anything can happen in Port Charles so stay tuned to General Hospital airing weekdays on ABC. And don’t forget to check back right here regularly for all your General Hospital news, information, and spoilers!