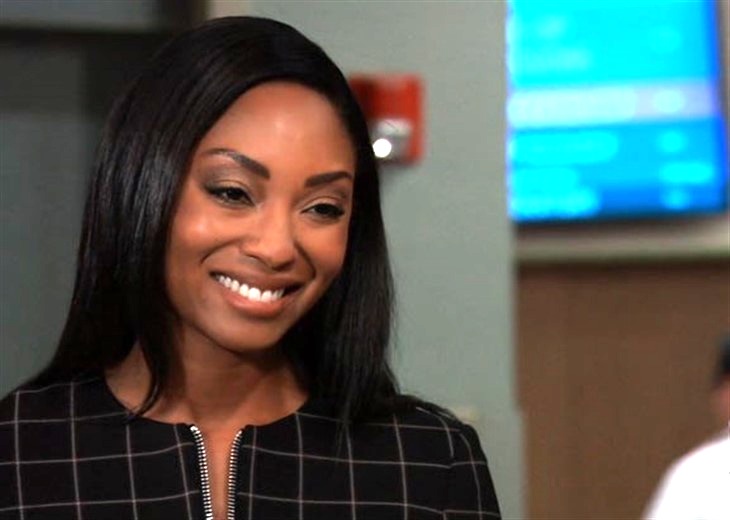 General Hospital spoilers reveal that Portia has known about Trina’s paternity since conception. Portia has a chance to come clean when she first came to town and refused. However, Portia said over a year ago that Trina needed to know the truth about her father. There probably isn’t much that Trina doesn’t know about Marcus Taggert (Real Andrews), this suggests her father is someone else.

Portia has been very concerned since Marshall Ashford’s (Robert Gossett) mental illness was exposed. Portia has been trying for weeks to get genetic testing done on Trina. However, Trina knows nothing about this. Portia has finally scored an appointment but the doctor refuses to allow Portia to bring the DNA samples in. However, Neither Portia nor Taggert have mental health issues.

Jordan remembered Portia’s confession from the night in the gas-filled cabin. However, Jordan didn’t remember this for some time because her problems that were caused by inhaling the gas in that cabin. Recently, Jordan remembered this but Portia deflected when asked about it. Now that Jordan has overheard Portia’s conversation with the doctor, she knows she is on the right track.

Will Jordan tell Curtis the truth since it is obvious that Portia has no desire to? Jordan has encouraged Portia to tell the truth. Jordan has mulled over whether or not she should say something herself. Now it is time to tell the full story. Does Curtis not deserve to know the truth about his daughter?

Curtis left Jordan because she continued to lie and keep secrets from him. Curtis left Portia years ago when he found out she was married. Now both of these women are lying to Curtis again only this time it is over his child. Curtis has been denied almost two decades with his daughter. Still, Curtis has not been told the truth even though Portia is aware of his father’s mental illness. Can Curtis and Portia get past this?

If Jordan exposes Portia’s lies, would she be doing it to help Curtis or to take a stab at Portia? After all, Portia’s secret is so much bigger than anything Jordan has kept from him. Will this be the end of Portia and Curtis?