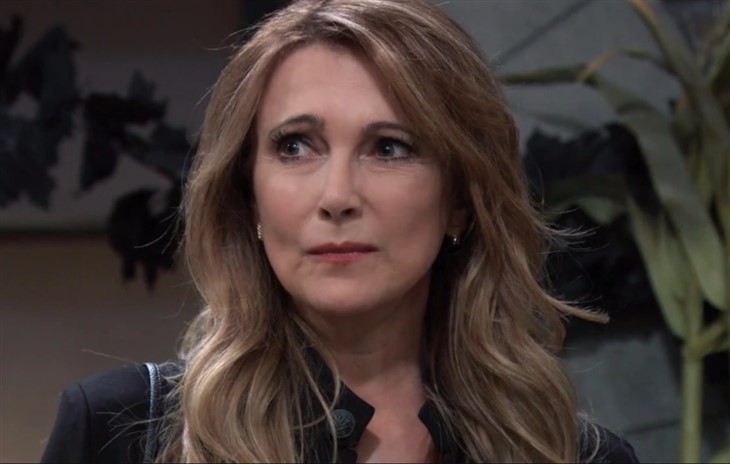 Holly first appeared in 1982, during the time that Laura Spencer, now Collins (Genie Francis) was being held on Cassadine Island by Stavros Cassadine (most recently Robert Kelker-Kelly). A lonely Luke Spencer (Anthony Geary) saw Holly skinny dipping while on a camping trip, immediately being smitten with the beautiful girl. Little did he know Holly was a con woman out to bilk the citizens of Port Charles out of millions of dollars through an oil scam.

During that time she was kidnapped, and Robert traveled with Luke to Canada to rescue her and recover the money. Luke and Holly returned home, only for Luke to head for the mountains after an argument and be trapped in an avalanche, presumed dead.

While Luke was presumed dead, Robert and Holly became involved, with Holly carrying Luke’s child; Holly grieved Luke and later the loss of their baby. She was about to be deported so Robert offered to marry her and raise the child, but Holly soon miscarried after Robert and Holly were married. Then Luke appeared alive and a love triangle began between her, Robert and Luke, Holly feeling torn between the two men. Eventually, Laura reappeared after escaping the Cassadines, and Luke and Laura reunited and Holly and Robert stayed together, becoming one of General Hospital’s most loved supercouples. Then Holly and Robert’s marriage was put to the test with the reappearance of Anna Devane (Finola Hughes) and her and Robert’s daughter Robin Scorpio (Kimberly McCullough).

Some time later, Robert and Holly working out their problems over Anna and Robin, Holly went on a trip to Singapore and crossed paths with Luke. He was married to Laura but the two had a one night stand and she again became pregnant; she never told him and put up the baby boy for adoption. Years later she and Ethan Sutton, known by Ethan Lovett (Nathan Parsons) would run across each other by happenstance and rediscover each other as mother and son.

That turned into a who’s the daddy story for Luke and Robert, Ethan ultimately being proven to be Luke’s son. Then the unthinkable happened, and Robert received word Holly had been killed in a plane crash.

They both reappeared alive, but Holly would be presumed dead during disappearances for many more years, and reappeared alive several times. Holly helped Mac Scorpio (John J. York) raise Robin for a period of time, before dating Luke’s lookalike cousin Bill Eckert (Anthony Geary) for a short time, then leaving Port Charles.