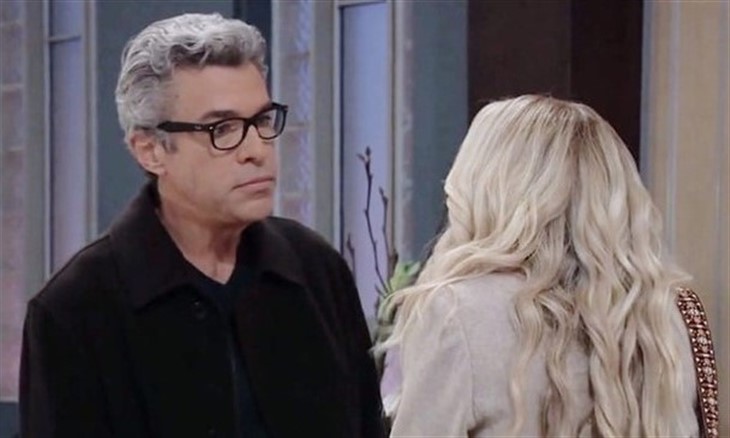 At their daughter Maxie’s apartment, Felicia sounds like she’s making a dare as she asks Mac Scorpio (John J. York) what he’s so afraid of. Mac says just knowing that may be too high a price. Mac, Felicia and Maxie were talking about the probability that Mac may be Cody’s birth father, and although he asked some questions at GH he hasn’t moved forward.

Felicia thought that possibly Dominique Stanton (Shell Danielson) gave birth while in Shadybrook and it was Leopold Taub (Chip Lucia) who gave her baby to the Bell family to raise. That would be one reason why Dominque never talked about having another child, particularly with Mac.

Also at the hospital, Maxie demands answers from Britt Westbourne (Kelly Thiebaud) and tells her she was starting to think she was wrong. Since Britt has sort of been dating Cody, he is probably the subject matter, with Maxie now wondering if she has a grown stepbrother. Britt had also been questioned by Mac about Cody, but he had obviously been trying to fish for some answers as to whether he’d talked about his childhood or family. Mac had made it sound like Cody might be involved in attacking Ava Cassadine (Maura West) but everyone at that picnic is a person of interest at this point. The PCPD has published a Crimestoppers type request for information regarding Ava’s attacker.

At the Port Charles Police Department where he’s getting ready to be transported to Pentonville Prison, Spencer has some reassuring words for Rory. No doubt Rory has some questions in his mind about what Spencer and Trina Robinson (Tabyana Ali) were talking about for so long at her party by themselves. Spencer explains to Rory, telling him that he has nothing to worry about, there is no way he could compete for Trina now.

Spencer will be serving a three month term at the prison for breaking his probation and parole by taking an unauthorized field trip to his mother’s grave. Spencer revealed this in court, in an attempt to alibi Trina into an exoneration, although it turned out to not be necessary.

Someone is obviously asking Nikolas Cassadine (Marcus Coloma) some difficult questions, and they must be related to Ava’s attack. Nikolas looks scared and a little bit shocked as he asks the person what they’re implying. Everyone at the Quartermaine charity picnic is a potential subject, which is what the term “person of interest” means. It’s possible his aunt Alexis Davis (Nancy Lee Grahn) may be the one asking the questions, given the subject matter she and Valentin Cassadine (James Patrick Stuart) previously discussed. Nikolas, Victor and Ava are all cooperating to keep the truth about Esmé Prince’s fall from the parapet from coming to light.

In Ava’s hospital room at the General Hospital intensive care unit, she is talking to a trusted visitor, possibly Sonny Corinthos (Maurice Benard) telling them they deserve to know. Sonny is the father of her daughter Avery Jerome-Corinthos (Ava and Grace Scarola) and he’s making sure she’s protected. Sonny suspects something happened to Esmé and Ava was involved, but she was keeping it quiet.

Now that she nearly paid with her life possibly at the hands of Nikolas or maybe even a not-so-dead Esmé, she apparently decided someone needs the truth. Sonny’s got some other persons of interest in mind, however.

GH Spoilers – Keeping An Eye Out

Ava is obviously the topic of conversation between Dante Falconeri (Dominic Zamprogna) and Sam McCall (Kelly Monaco) as well. Dante says Sonny is not the only one keeping an eye out, and he’s got to be talking about Ava’s protection and also the search for her attacker. It could be nearly anyone currently in or possibly out of Port Charles, possibly having split the scene after the picnic. The search will not cease until Ava is safe and the rest of Port Charles as well.

Cody makes a proposition to Selina Wu (Lydia Look) and he wants to know if he’s going to need a lawyer. The last time the two had contact was when he got into her high stake poker game and scared away all the players, having won the whole pot. Cody wound up badly beaten in an alley, where Britt found him and came to his rescue.

If this is Selina he’s talking to when he asks about a lawyer, this encounter must be much more civil. She may be trying to use him to keep Britt away from her nephew, Brad Cooper (Parry Shen).

Sonny is meeting with Victor at the Port Charles Grill, where he apparently invited Victor to ask him some questions. Cassadine versus Corinthos should be an interesting match, and possibly pretty closely even. However, the two clash as Sonny confronts Victor, likely about his involvement in Ava’s attack and possibly Esmé’s disappearance.

The Young And The Restless To Celebrate 50th Season

Days Of Our Lives Spoilers: Gabi’s Life Is About To Change Forever