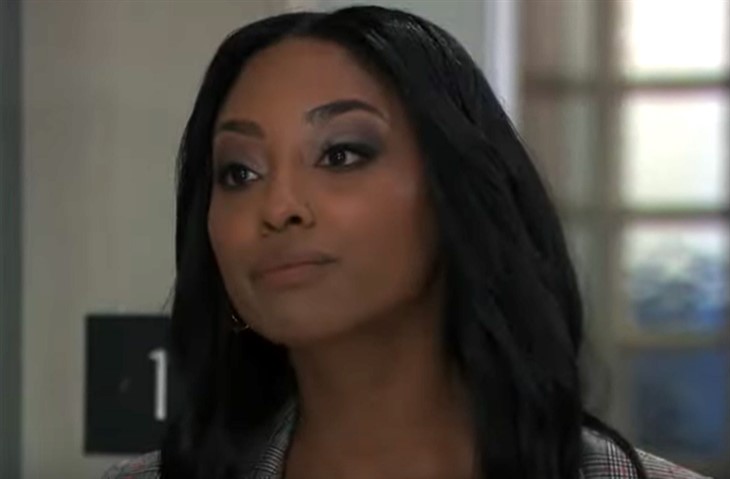 It may be Nikolas Cassadine (Marcus Coloma) who Jordan is questioning, asking who did this to him; he struggled with someone appearing to be The Hook who broke into his house.

But this Hook had a different Hook than the original, she had a gaffing hook from the Cassadine boathouse instead of the Quartermaine boathouse. There are dangerous doings all around Wyndemere, with Esmé Prince (Avery Kristen Pohl) escaped and Nikolas suspecting her of being The Hook.

Nikolas saw part of her face but it didn’t look like Esmé’s chin, it looked more like Heather Webber’s. Heather is on the run, and she may have broken in and decided to copycat the real Hook.

At the Metro Court, Ava Cassadine (Maura West) nurses a martini and catches up with Nina Reeves (Cynthia Watros). She tells her freedom isn’t all it’s cracked up to be, obviously talking about her freedom from Nikolas, because she’s still got Victor Cassadine (Charles Shaughnessy) to deal with.

Nina’s got her own issues she’s trying to work through with Sonny Corinthos (Maurice Benard) and some misguided misunderstandings. All around, Nina will be trying to make amends.

At GH, Willow Tait (Katelyn MacMullen) and Michael Corinthos (Chad Duell) are still dealing with the aftermath of Willow’s reveal to Michael about her leukemia. Michael was shocked, as expected, that her cancer has travelled so fast although he understood her wanting to protect the baby.

Willow has tried to not sound too fatalistic, but realistically, she may not live long enough to have the baby.

Willow has a favor of her own to ask Michael, and it may be related to choices between saving the baby and herself. Although she is starting treatment now, she is in stage four and she needs a bone marrow donor in addition to chemotherapy.

Victor is trying to keep on top of things, likely already having figured out that Valentin Cassadine (James Patrick Stuart) is behind Anna Devane’s (Finola Hughes) escape. Victor had deadly plans for Anna at Pentonville, but now Vanna’s on the run, and having his people looking for Valentin.

He talks to one of his operatives on the phone, asking if there was any word yet from his son? Victor is the last person Valentin would plan to call, unless he has an untraceable phone and he’s playing dumb about being on the run with Anna.

Elizabeth’s at the docks, likely looking for Nikolas who she hasn’t been able to reach; Esmé is also on the docks having made it to shore. Elizabeth’s on the phone calling the police, saying she’s just spotted a fugitive, but whether it’s Esmé or Heather is a toss up.

Esmé is a fugitive as well as Heather, and Elizabeth may not know about Heather being on the loose, although she’s nearby as well.

But someone’s watching her and she’s going to be in more danger from Heather, who’s already threatened her than Esmé, unless she’s the Hook. But if Esmé thinks she’s calling about her, then Esmé is definitely the danger to Elizabeth.

Josslyn Jacks (Eden McCoy) may also be in danger from the Hook, as she’s being watched through the window and by herself. However, Dex Heller (Evan Hofer) was bleeding profusely and wants nothing to do with cops so he’s probably not the victim Jordan was talking to.

Dex is likely the one looking through the window at Josslyn and will ask her to help him, although he was in very bad shape. He had walked away from the transport where the D’Archam guard’s gun had gone off into his side, there’s a good chance he had internal injuries.

Dex helped Josslyn save Ava, and she saved him from Sonny, now it looks like she’ll save him again.

General Hospital Spoilers – The Search Is On

Dante Falconeri (Dominic Zamprogna) is looking for both fugitives but it’s obvious that Heather is more of a priority than Anna. Neither he nor Jordan, or Mac Scorpio (John J. York) for that matter believe Anna shot Lucy Coe (Lynn Herring) and possibly killed her.

Heather, however is extremely dangerous and unpredictable, and there’s a chance she’s copycatting the Hook and attacked Nikolas, also being familiar with Spoon Island and Wyndemere from her past.

Dante tells someone Heather is capable of anything, and she certainly is. She’s right under everyone’s nose at Kelly’s as he speaks.

Heather’s favorite food is a Kelly’s BLT, and she’s already there in a grey hoodie jacket over her prison clothes. It’s surprising that someone isn’t picking up on that pumpkin patch couture and realizing she’s an escapee.

She may be speaking to someone who doesn’t know who she is, or possibly someone who does but who’s afraid of her. She tells them, obviously speaking of some victims, that it’s too bad, they get what they deserve, although she thinks she deserves a free sandwich.

Days Of Our Lives Spoilers: Will Xander Set Susan Free?