General Hospital Spoilers: Sonny Considers Moving On From Nina — But To Whom? 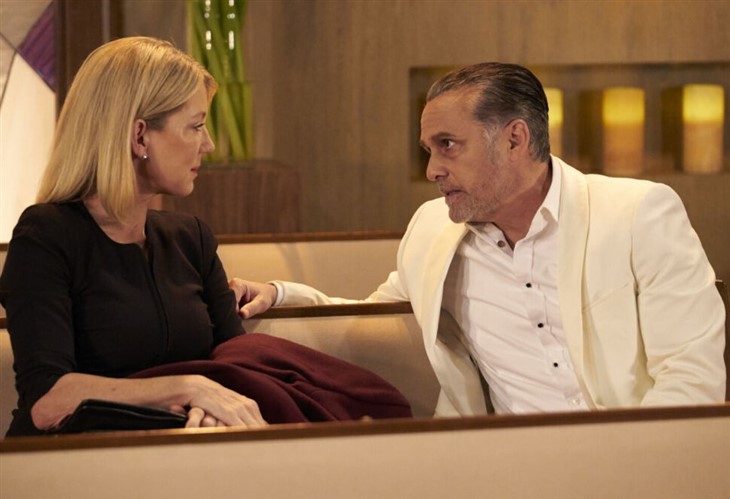 General Hospital spoilers reveals Sonny Corinthos (Maurice Benard) and Nina Reeves (Cynthia Reeves) have had a rough start to their romance back in Port Charles. It seems like more than miles from Nixon Falls and the life they shared together there, however small and encased in a bubble it was.

Nina has been going to great lengths to make it work with Sonny, and he’s returned the favor by testifying on her behalf in court when she fought for the right to see her grandson, Wiley Corinthos (Viron Weaver). But as the drama that originally ensued when they first coupled back up has subsided, this duo is finding they may not be such a hot item after all.

Sonny tried to warn Nina when they first flirted with coupling up in Port Charles that he was a far cry from the ‘Mike’ she knew in Nixon Falls. She claimed she didn’t care — but also argued she still saw ‘Mike’ in Sonny. The truth is, Nina may have been seeing just what she wanted to see instead of what was really in front of her. Sonny is a man who has spent the majority of his life involved with women that really know how to bring the drama.

He likes that angst and passion that come with a push-and-pull, on-again-off-again relationship. Smooth sailing isn’t for Sonny. As he starts to realize how bored he is with the mundane nature of his relationship with Nina, he’s going to go sniffing around somewhere else, like Sonny always does.

Unfortunately, Nina seems to be slow on the learning curve on love. When will she learn her lesson? When Valentin Cassadine (James Patrick Stuart) broke her heart, she continued to take him back. When Sasha Gilmore Corbin (Sofia Mattsson) lied to her and humiliated her, she still befriended her and came to her aid later. When Liesl Obrecht (Kathleen Gati) stuck her nose in where it didn’t belong in Nina’s affairs, she still continued to trust her with private details of her life. Alas, when Sonny is clearly trying to break away from Nina and showing all signs he’s not in love with her, she’s going to chase him instead of letting him go.

The big question isn’t really if Sonny will move on from Nina. It’s that when he does, whom will it be with? There are plenty of options for a guy like Sonny, but he’s choosy, and he knows what he likes. Will we see the return of someone from the past that gives Sonny’s life new meaning? Brenda Barrett (Vanessa Marcil) or Reese Marshall (Kari Wuhrer) perhaps? Maybe, but the more probable storyline is that Sonny finds his way back to Carly again, and rumor has it he’s going to be chomping at the bit to do just that when he sees she’s falling hard and fast for Drew Cain (Cameron Mathison). Who do you think Sonny will end up with after Nina?

Let us know, and keep checking back every day for more GH news, updates, and spoilers!

Loren And Alexei: After The 90 Days Teaser: Alexei Considers A Vasectomy