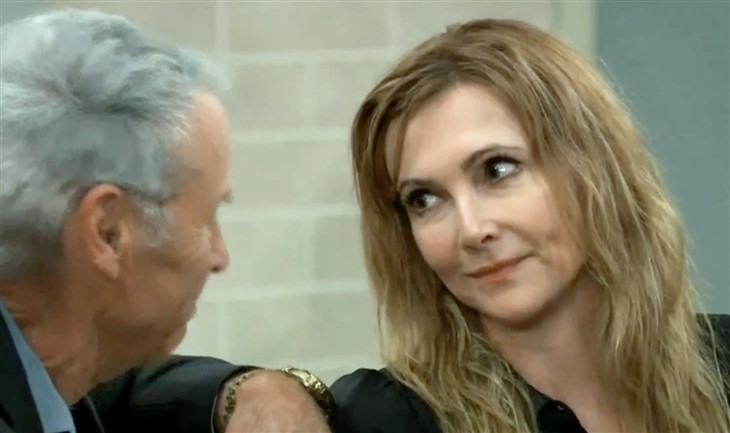 General Hospital spoilers and rumors tease something’s off with Holly Sutton (Emma Samms) besides having memory loss for the last two years. Holly is exhibiting some suspicious behavior, could she be brainwashed?

One of the most glaring inconsistencies in Holly’s behavior was when after Robert Scorpio (Tristan Rogers) finally forced her to get checked out at GH, he gave her his phone. She wanted no checkup but finally he got her there and left the examining room for a minute and she was supposed to be calling her son, Ethan Sutton (Nathan Parsons). Instead, she pushed the do not disturb on his phone and lied to Robert that she couldn’t reach Ethan, while in the meantime Anna Devane (Finola Hughes) left an urgent message.

Dr. Austin Gatlin-Holt (Roger Howarth) wanted to keep Holly overnight for observation but she refused. He did manage to get an MRI of her brain; there was no chip as in the case of Drew Cain (Cameron Mathison) but no physical cause for memory loss either.

Holly remembers nothing since she was working for the WSB in Monte Carlo, from what she told Robert except she thinks she was on a boat. Robert, Ethan and Olivia Quartermaine (Lisa LoCicero) had tracked her to Monte Carlo and a casino owned by Winston Rudge (David S. Lee) called La Lucien. It was revealed later Rudge faked a ship sinking Holly had been on, faked her death, and said she was burned up before moving her again. Later it was also revealed he’d been working for Victor Cassadine (Charles Shaughnessy) and Holly was shown in a room similar to where he kidnapped Liesl Obrecht (Kathleen Gati) to. Holly was shown screaming and wanting to be let out, so something has obviously been done to her to erase her memories.

General Hospital Spoilers – She Reappears As Anna Devane Is Framed

Holly reappeared just as Lucy Coe (Lynn Herring) was shot, Valentin Cassadine (James Patrick Stuart) was forced on Victor’s plane, and Anna was framed for Lucy’s presumed murder. Obviously, Victor is behind the reappearance of Holly, the possible reappearance of the presumed dead Alex Devane (Finola Hughes) and the disappearance of Lucy. There is a high probability that Holly has been brainwashed and programmed, possibly to carry out Victor’s orders, but most certainly to distract Robert.

Just prior to Lucy’s shooting, Valentin’s exit and Holly’s reappearance, Victor had called someone to arrange a Luke Spencer (Anthony Geary) type cable car accident. He told the person Robert and Anna would be too distracted to do any further investigation.

The Bold And The Beautiful Spoilers: Brooke Confronts Steffy Over Thomas

Days Of Our Lives Spoilers: Brady Reluctantly Moves Kristen Into John And Marlena’s