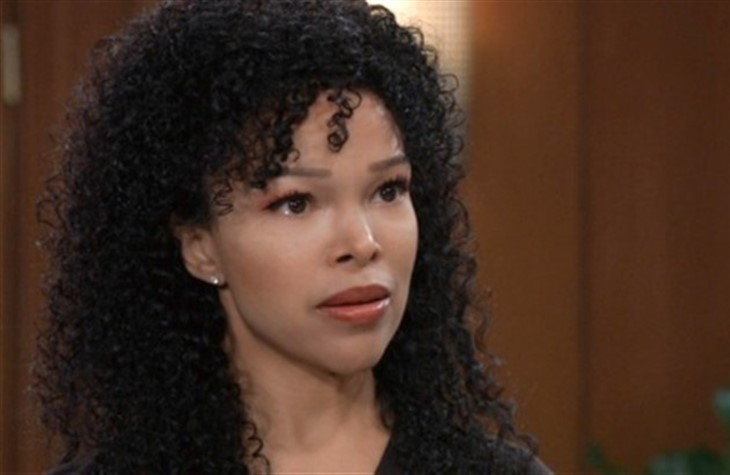 Ava Jerome Cassadine (Maura West) may have been released from GH, but that doesn’t mean there’s nothing further to worry about. In Portia’s office, it looks like she’s getting some well-meaning warnings, and Ava asks if there’s anything else wrong with her.

Portia may not be worried about Ava’s recovery from the wound left in her by “The Hook” but Ava seems to be getting a read that she’s worried.

Portia and Ava are both worried about Trina Robinson (Tabyana Ali) since it looks like the attacks are focused on people related to her and her trial. That means Ava and Portia both could be future targets, Ava for a second time.

GH Spoilers – What’s In The Envelope

Jordan Ashford (Tanisha Harper) is in her office at the Port Charles Police Department as she hands Curtis Ashford (Donnell Turner) a large envelope across her desk. She asks Curtis to look inside the envelope, and the likely contents are her signed divorce papers so he can move on and set up his wedding to Portia.

There had been some questions, and arguments between herself and Portia as to whether Jordan wanted to hang onto him or not, and the contents of the envelope will answer them. A serial killer is out there in Port Charles, and Jordan’s too busy to worry about their past when she has peoples’ futures to protect.

The PCPD has found another body, and Oz Haggerty (Max Faugno) got a deadly shock as he came from the PCPD after getting his signed immunity deal. The Hook has claimed another victim, and Dante tells Sam McCall (Kelly Monaco) the police are more determined than ever to find the monster.

The trajectory of the investigation changed when Diane Miller (Carolyn Hennesy) identified her attacker as a woman, so the search is for a she-monster.

Dante and Sam are likely at Brando Corbin’s (Johnny Wactor) funeral since he was the first fatality. Now there is a second fatality since no one was nearby to help Oz.

Victor Cassadine (Charles Shaughnessy) interrogates Nikolas Cassadine (Marcus Coloma) at Wyndemere, and wants to know what else Ava has on him. Valentin Cassadine (James Patrick Stuart) was able to retrieve the written confession to killing Esmé that Nikolas gave to Ava.

Victor was shocked when he saw Spencer Cassadine’s (Nicholas Chavez) condition in Pentonville, and he doesn’t want another Cassadine behind bars. It’s obvious that Victor doesn’t trust Ava, and he’s concerned that Ava would turn Nikolas in; of course none of them know yet that Esmé survived.

A roughed up Dex Heller (Evan Hofer) is questioned by a much too curious Josslyn Jacks (Eden McCoy), who picks up on a discrepancy very quickly in his narrative.

Dex apparently made an offhand comment about Josslyn sounding like her brother Michael Corinthos (Chad Duell) and she wants to know how he knows she sounds like him. Dex will have to come up with a quick cover story, reminding her he’s had a couple of interactions with Michael.

At Brando’s funeral, family and friends gather as Sonny Corinthos (Maurice Benard) toasts Brando with a bottle of bear. Sonny says he’ll never be forgotten, as Nina Reeves (Cynthia Watros) stands by his side near a large portrait of a smiling Brando.

Nina will continue to support her “adopted” daughter Sasha Gilmore Corbin (Sofia Mattsson) and Gladys Corbin (Bonnie Burroughs) will give Sonny an important reminder. The family will pull together even as the search for his murderer is ongoing.

Esmé may be the Port Charles hook, but it remains to be seen; after she left Spring Ridge, visiting her birth father Ryan Chamberlain (Jon Lindstrom) she had something to do. That was when Oz was killed down on the docks, which is the way to get to Wyndemere, where she is now, although she probably used the tunnels.

She’s now inside and smiles as she asks herself out loud, “who says you can’t go home again”? She has some dastardly plots to accomplish, one of which includes a bombshell she’ll drop on Nikolas-as if her showing up alive isn’t enough of a bombshell.