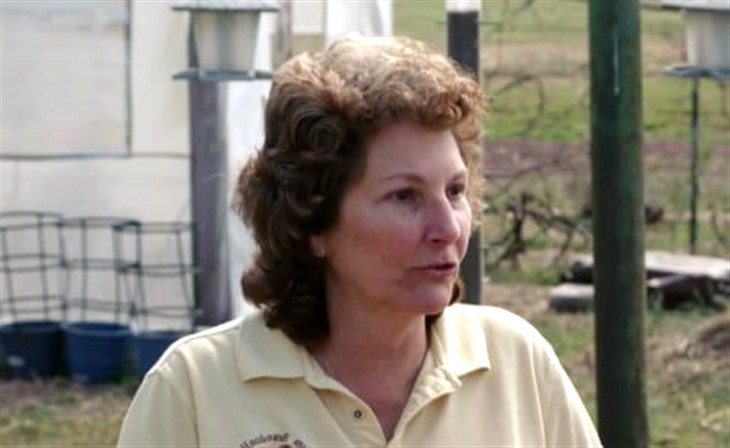 90 Day Fiancé fans will recall Brandon’s mom Betty Gibbs and her tightly curled hair. While her son and his fiancé, Julia Trubkina, are the main TLC reality stars, Betty has amassed quite the following of her own on social media. Due to this, when Betty got her hair straightened, she took to Instagram to find out her followers’ reaction to her new style.

Betty Gibbs has featured on 90 Day Fiancé with her son, Brandon, and his Russian wife, Julia Trubkina. Due to her interaction with the couple, she has gradually gained a social media following of her own.

Recently, Betty decided to try out a whole new look and had her curly hair straightened. She quickly had five photos taken of her new look, sharing them on her Instagram account. Meanwhile, Betty captioned the images, “Surprise!! Me with straight hair! What do you think? Curly, or straight??”

The series of photos revealed Betty posing like a model in different positions, smiling as she showed off her new style.

Fans and other 90 Day Fiancé stars alike were surprised at the change and quickly reacted to her new look. Let’s face it, everyone is used to seeing Betty with her signature curly hair, so initially, her followers were shocked. However, as the comments flowed, the general consensus was that fans liked both looks. 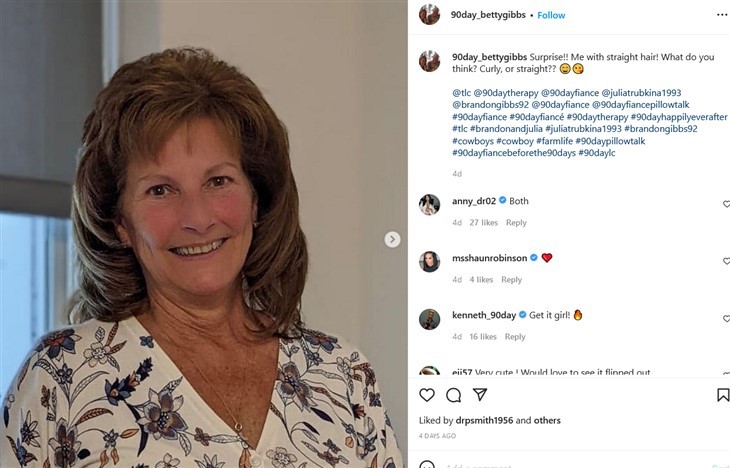 Fellow 90 Day Fiancé star Kenneth Niedermeyer loved the look, writing, “Get it girl!” followed by a flame emoji. Meanwhile, Ariela Weinberg’s mom, Janice, wrote, “You look very nice. You can vary hair depending,” also adding a flame emoji. On top of this, Jovi Dufren’s mom, Gwen and Anny Francisco all chimed in, and many of Betty’s followers exclaimed at how much younger she looks with straight hair.

While at first, 90 Day Fiancé fans were irritated at Ron and Betty Gibbs’ treatment of Julia, the couple has grown on fans. In fact, due to their involvement in the show, this has led to Brandon’s parents featuring on the popular 90 Day Fiancé: Pillow Talk. In the TLC spinoff, Ron and Betty offer commentary on the current season. Meanwhile, the opinionated pair doesn’t exactly hold back with their criticisms of certain relationships on the show. On top of this, their fans might get to see more of Ron and Betty if Brandon and Julia keep featuring in the TLC reality franchise.

Readers, what do you think of Betty’s new look? Let us know by dropping a comment below.