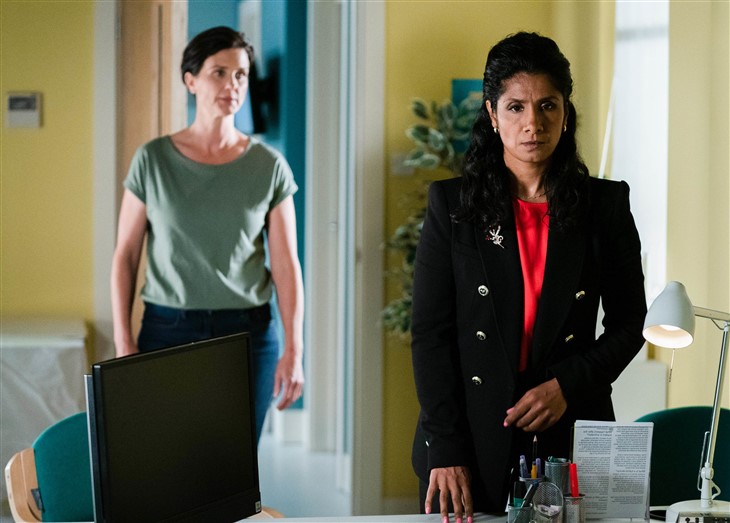 EastEnders spoilers, news, and updates tease that Eve Unwin (Heather Peace) will notice Suki Panesar’s (Balvinder Sopal) suspicious behavior. Suki has been guilt-stricken after believing that she killed Ranveer Gulati (Anil Goutam) when he tried to assault her.

Fans may recall that Suki thought she accidentally killed Ranveer after he tried to assault her. He made sexual advances as Suki tried to make him sign a contract that would give her control over his Mumbai business. She then threatened Ranveer to stop because she’s been filming their entire conversation with a hidden camera.

But Ranveer wasn’t fazed and forced himself on her. Sukie knocked Ranveer over the head with an object. As Suki grappled with the idea that she might have killed him, Ranveer’s son, Ravi, arrived. Shockingly, Ravi sided with Suki and offered to help her clean up the scene.

After Suki left, Ravi realized that Ranveer was still alive. But he finished the job and let Suki continue to believe that she killed his father. Later on, Ravi Gulati (Aaron Thiara) found out that Suki had a hidden camera and it captured everything that he did.

Meanwhile, EastEnders spoilers say Eve becomes more suspicious of Suki as she continues to act weird. She encourages Kheerat Panesar (Jaz Deol) to attend the opening of Walford East, even though the latter feels unhappy about it.

Later on, Eve overhears Suki and Ravi arguing over something and tries to convince Suki to tell her what happened.

During Walford East’s opening, Suki starts to feel anxious about what to say when people ask why Kheerat and Ranveer are absent. She breathes a sigh of relief when Eve joins the party with Kheerat, Stacey Slater (Lacey Turner), Ash Kaur (Gurlaine Kaur Garcha), and Vinny Panesar (Shiv Jalota).

Suki panics when someone asks Kheerat about Ranveer but Ravi steps in and takes over the conversation.

In an earlier interview with EastEnders, Aaron Thiara opens up about joining the show as Ravi Gulati. The actor said that the cast members who played the Panesar family have been very welcoming. He said they were wonderful to work with, even though it may sound like a cliché.

He added that they’ve allowed him to bring “a new dynamic to the family.”

“They’ve allowed me to also be confident in bringing that dynamic with them and working with actors who are so willing to receive and then give back unselfishly. Without sounding too cheesy, it is very much like a family and I’ve been lucky to be a part of it,” he added.

B&B Spoilers: Secret Forrester Creations Project, Who Is Getting Married