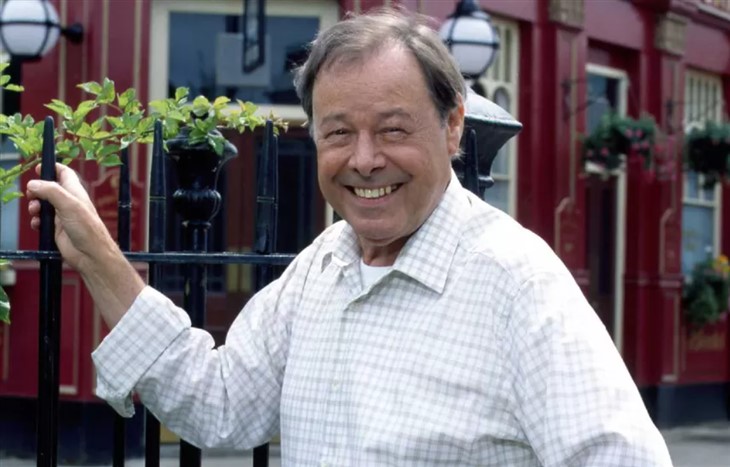 EastEnders news reveals that Bill Treacher, one of the breakout show’s first stars, has died at the age of 92. His family confirmed the sad news about the star who brought character Arthur Fowler to life from day one of the iconic sudser.

Treacher debuted on the BBC One soap in February 1985. EastEnders is a staple of Brit television, and even members of the royal family have expressed a soft spot for the soap that revolves around working-class characters in fictional Walford. Treacher’s credits include The Bill and Casualty, as well as films such as The Musketeer, Tale Of The Mummy, and George And The Dragon.

Treacher’s family said in a statement that the actor’s health had been in a decline for some time: “Bill was a brilliant actor and a wonderful husband and father, plus a very fine human being. He will be hugely missed.”

The actor passed away on Saturday and his survivors include his wife, Kate, his son, Jamie and his daughter, Sophie. Treacher was married to Australian actress Katherine Kessey, and the couple shared lived in Suffolk.

Treacher departed the show in 1996. A show spokesman said: “It is with great sadness that we learnt of the passing of Bill Treacher. As one of our original cast members, Bill created a much-loved character in Arthur Fowler and, alongside Wendy Richard, they created an iconic family in the Fowlers who still remain at the heart of the show.”

“Bill left EastEnders in 1996 so it is a true testament to both him, and the character that he created in Arthur, that he is still thought of so fondly. Bill will always be remembered for his charm, sense of humour – with a smile that lit up the room – and more importantly as a family man who was devoted to his wife and children. Bill will forever be held in great affection by everyone at EastEnders and all those that loved watching him.”

Co-star Gillian Taylforth (Kathy Beale) said of her former costar, “He always had a sparkle in his eyes, usually before he mischievously set us off laughing during scenes.”

This June King Charles and Queen Camilla visited the set to mark the occasion of Queen Elizabeth’s Platinum Jubilee. Their visit was written into the show and various characters including Mick Carter (Danny Dyer) took the couple on a tour of Albert Square.

Since its debut EastEnders has been at the forefront of socially conscious drama and no less than four EastEnders shows are listed among the all-time top 10 most-watched episodes in the UK. One of those shows was the 1986 Christmas Day episode watched by over 30 million viewers.