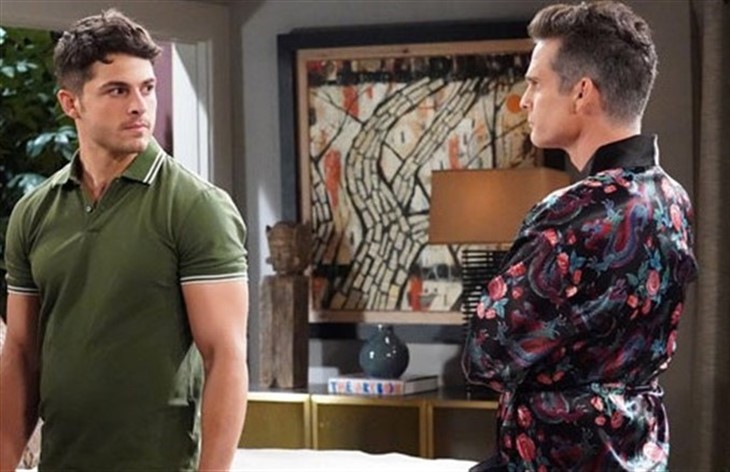 Days of Our Lives spoilers and updates tease that thanks to Leo Stark (Greg Rikaart) Sonny Kiriakis (Zach Tinker) is in the hospital! Will Horton (Chandler Massey) will demand a police investigation after Sonny wakes up not knowing what happened to him in an upcoming DOOL episode!

Sonny will wake up with memory gaps, and try to piece together what happened to him the night before; he’ll have his suspicions, to be sure. This is not something that usually happens with Sonny, he’s always sharp as a tack so he’ll be concerned and suspect Leo’s behind it, maybe slipping him a drug. Date rape drugs would have this effect, and he’ll go to Salem University Hospital as soon as possible to get himself checked out because he knows some drugs pass quickly.

Sonny will remember Leo’s revenge threats to him and Chad DiMera (Billy Flynn) but he may not remember much else – he may have to be driven to the ER. Dr. Kayla Johnson (Mary Beth Evans) will likely do the examination and she’ll include drug screens which should show something if it’s still affecting him like that.

Viewers can expect that Will Horton will be notified, since Sonny is his husband and he’ll want to take action against Leo, since he had made those threats previously. That’s the thing about threats made publicly – even if the person doesn’t follow through on them someone else could and the original person will be suspected! Will and Sonny have tangled with Leo before, and Will hates him for interfering in their relationship and delaying their marriage! Will is definitely going to push for a police investigation, and send the detectives looking for Leo as the main suspect for drugging Sonny! Sonny should be just fine once the drug or drugs are out of his system, but he’ll remain haunted by that missing night!

Days Of Our Lives Spoilers – Will Horton Will Return To Salem

Chances are, Will certainly will return to Salem to help Sonny deal with this Leo mess and the aftermath of his being drugged. He will also want to check in on his little sister Allie Horton (Lindsay Arnold) after learning of her devilish ordeal; he hasn’t seen her since early spring! But his main focus will be helping his husband, possibly again teaming up with Chad, to deal with Leo once and for all – in a legal manner, of course!

All of them are tired of Leo turning up like a bad penny or a boomerang – every time they think they’re rid of him he keeps coming back! For Chad’s part, it makes it even worse that Leo is buddy buddy with Gwen Rizchech (Emily O’Brien)!

One thing is certain – between Will and Sonny and maybe Chad, they have to find some way that Leo drugged Sonny! Everyone will be glad if the drug screen shows something other than that horrid Dr. Wilhelm Rolf (William Utay) serum that was used on Abigail DiMera (Marci Miller)! Sonny would have been much worse off if that had been used, although sometimes Rolf comes up with a winner, like the one that resurrected Will. But even that had nearly fatal side effects, as viewers will recall; they’ll work to get Leo behind bars if it’s the last thing they do!