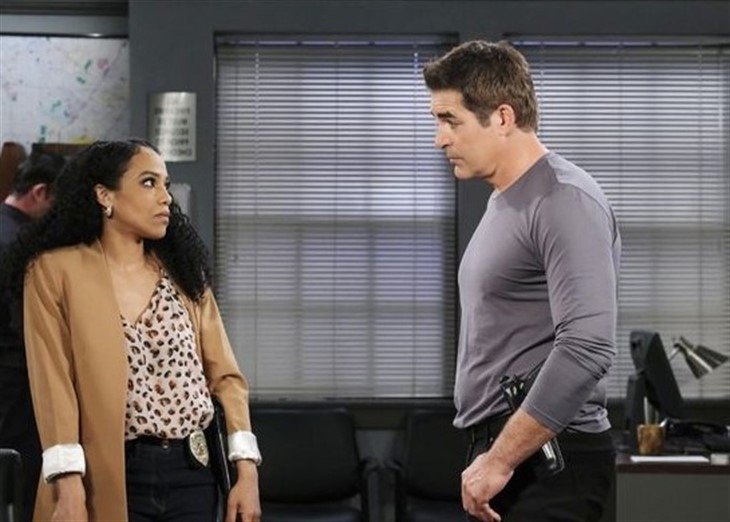 Days of Our Lives spoilers and updates tease that a manhunt will be underway for the Salem Stabber after Jada Hunter (Elia Cantu) makes a stunning discovery. She and Rafe Hernandez (Galen Gering) are reviewing the security footage that cleared Clyde Weston (James Read) when she discovers an edit.

Days Of Our Lives Spoilers – Clyde Weston Loses His Alibi

The security footage showed Clyde was fishing during the time that Abigail DiMera (Marci Miller) was murdered, and that is what had cleared him from suspicion. Jada spots an edit point where it looks like something was removed from the video and then it was spliced back together. It was such an expert job that when it was first looked at, it was barely detectable and Clyde was released from jail, having been cleared.

Clyde may not have had the expertise to doctor the video, but a good friend of his does, if he had the opportunity to do so. That would be Orpheus (George Del Hoyo) who has been brought into the Salem PD over his kidnapping of Kayla Johnson, (Mary Beth Evans) and two other women.

It’s possible that Orpheus did Clyde a favor with that video before he was caught, probably in exchange for Clyde doing a favor for him. Clyde had tried to convince Nancy Miller (Patrika Darbo) to marry him right away, having convinced her he’s on the straight and narrow; even going for his random drug tests.

Whether Clyde could have convinced her that they could leave town on an extended honeymoon is doubtful, but possible, going on the lam as a newlywed. But somehow apparently he disappears with or without Nancy in tow, as an all-points bulletin is issued and Rafe and Jada go on a manhunt for Clyde. Nancy had run into Chad DiMera (Billy Flynn) and he asked her about Craig Wesley (Kevin Spirtas) and vanilla cologne; she said Craig never wore it but Clyde did.

Days Of Our Lives Spoilers – The Manhunt Is On

With Chad’s clue about Sonny smelling vanilla and the security tape being edited, Days of Our Lives spoilers show Clyde now becomes the focus of a manhunt when Chad reports Clyde wears vanilla cologne. Clyde is now suspect number one, and indeed, at the hospital he saw Sonny in a room and flashed back to going after him with a knife. Nancy will be heartbroken and embarrassed when she realizes she was taken in by her boyfriend but even possibly in danger.

There may not be anything Clyde can do to get out of the charges this time, even if forensic technicians aren’t able to restore the missing edit. Clyde seemed very sincere in wanting to make his changes stick, so it’s almost inexplicable that he would have murdered Abigail and stabbed Sonny.

Y&R Spoilers: 3 Must-See Moments For The Week Of September 26