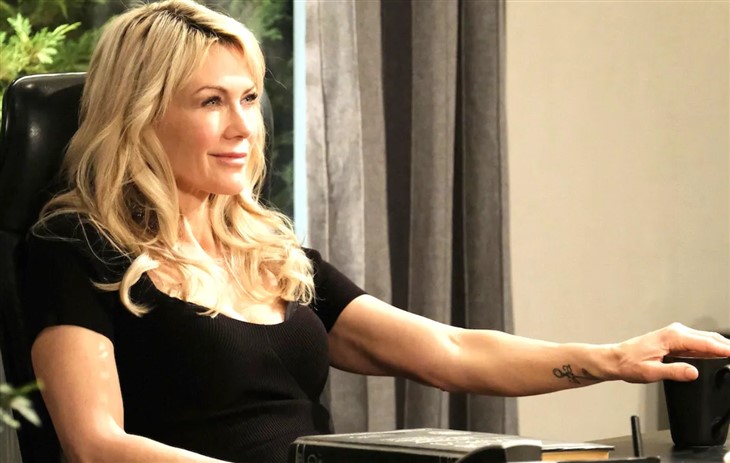 Days Of Our Lives Spoilers – Friendship Card And Pardon Surprise

DOOL spoilers reveal that Gwen wasn’t pleased when Kristen became her new cellmate. Kristen claimed that she was Gwen’s friend. Although suspicious, Gwen wasn’t going to turn down Kristen getting her pardoned by the governor.

Now that Kristen and Gwen are both out of prison, the scheming is just going to multiply. Kristen is still fixated on Brady, which means getting rid of Chloe.

Kristen isn’t exactly known for being a great friend. Despite how much Kristen claims to care about Lani Price-Grant (formerly played by Sal Stowers), look at all the trouble she got the detective into. Now Kristen is all alone and needs someone to help her scheme. That is the only reason Kristen played the friendship card with Gwen and got her released from prison.

Days of Our Lives spoilers reveal that Soap Opera Digest published a photo showing Gwen holding a mask. Gwen doesn’t have a pleased or sinister look on her face. Gwen actually looks like she is dreading putting on the mask. So, that suggests Gwen might be forced to impersonate another Salemite.

It’s possible that it’s time for Gwen to repay Kristen for getting her released from prison. Kristen can’t impersonate Chloe because it would be too obvious. So, Kristen might have Gwen impersonate Chloe. Perhaps Kristen will have fake Chloe get caught in bed with another man.

Of course, the real Chloe would deny she betrayed Brady. However, Brady would be too livid to think about Chloe being impersonated, especially if Kristen was seen nearby. So, even if Chloe does suggest Kristen must have impersonated her, Brady would think it’s impossible since she can’t be in two places at once.

So, it’s possible that Kristen will use this same strategy to break up Brady and Chloe. Of course, Kristen would be right there to console Brady and remind him that she would never break his heart like that. However, will Brady be fooled, or can Chloe prove that she was impersonated? Fans will have to keep watching the NBC soap to find out.