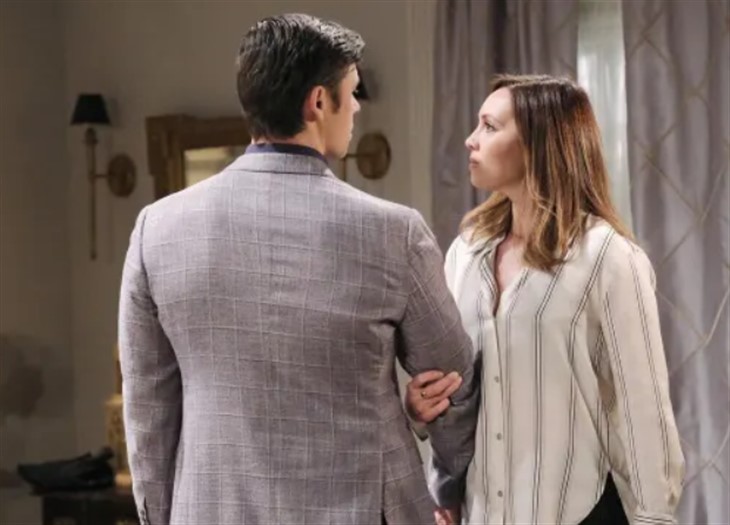 Days of Our Lives spoilers reveal that Gwen Rizczech (Emily O’Brien) and Xander Cook (Paul Telfer) have a double wedding during the week of April 11. While everyone thinks the antidote failed, could Sarah Horton (Linsey Godfrey) remember everything hours or a few days later? Sarah and Tony DiMera (Thaao Penghlis) could scheme to expose Gwen on her wedding day.

DOOL spoilers reveal that Anna DiMera (Leann Hunley) injected Sarah aka “Renee DuMonde” with the hallucinogen antidote. There was no warning and Anna wasn’t going to wait to get the okay from anyone. Anna just wants her husband back and for the “Renee” nightmare to be over. It seems that the antidote isn’t successful as everyone hoped, though.

“Renee” is filled with rage at Anna sticking her with a needle. It is teased that Anna gets arrested on Tuesday’s episode, which could be set in motion by “Renee.”

Even though it appears that the antidote isn’t successful, there is reason to believe there is a twist. The antidote might need time to work through Sarah’s system and get to her brain. So, Sarah could finally get her memories back a few hours or days later.

When Sarah remembers everything, she will be filled with rage. Of course, Sarah probably doesn’t know the level of Gwen’s involvement in the scheme. Sarah can’t get revenge on Kristen DiMera (Stacy Haiduk) right now.

However, she will probably be able to get payback after finding out some information from Abigail DiMera (Marci Miller). Maybe Ava Vitali (Tamara Braun) cuts a deal with the police by exposing Gwen’s actions. Somehow, Gwen is going to be exposed but it needs to happen quickly.

If Sarah finds out about Gwen’s scheme, she could want the woman to pay in the worst way. Plus, Sarah isn’t going to let Xander marry another woman. Tony will also want vengeance as his entire life has been thrown into chaos because of the “Renee” situation. What if Tony suggests a deceptive scheme that involves the wedding?

Telfer previously teased to Soap Opera Digest that the situation with Xander, Gwen, and Sarah will have a massively satisfying payoff at the very last moment. So, it sounds like the truth come out on Xander’s wedding day.

Could Tony and Sarah join Xander and Gwen for the double wedding? When the vows are being said, could Sarah suddenly announce that she isn’t “Renee” anymore and remembers everything? Imagine Xander’s shock when he learns the truth. “Xarah” fans might finally get what they’ve been waiting for… Sarah taking Gwen’s place and marrying Xander.