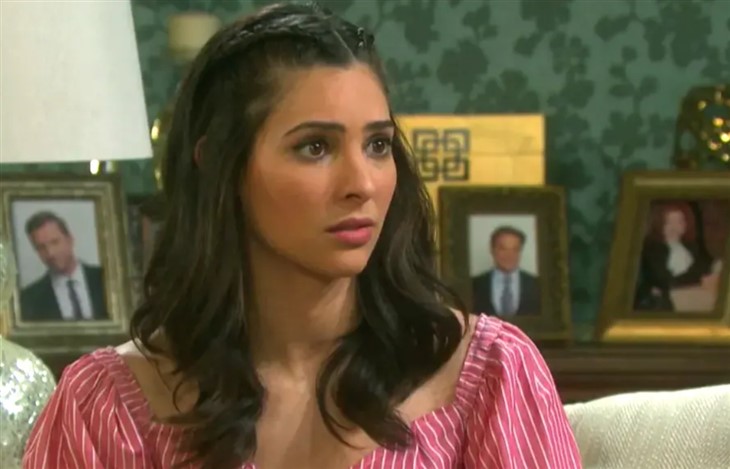 Days of Our Lives spoilers reveal that Gabi Hernandez (Camila Banus) is currently in a romance with Li Shin (Remington Hoffman). However, Li is keeping a lot of secrets. Plus, Stefan DiMera (Brandon Barash) will be resurrected. Gabi’s next love story might not have anything to do with Stefan or Li, though. Will Gabi have a fresh romance and unexpected love triangle?

DOOL spoilers reveal that Li has always seemed to be a straight shooter, a person who insists on doing things the right way. However, Gabi overheard Li telling someone on the phone that he loved them.

Gabi demanded to know who Li was talking to. Li claimed it was his mother and even suggested they call her back to prove it. Of course, Li knew that Gabi would say that wasn’t necessary. However, expect Li to have some more secrets. One of them has to do with Dr. Wilhelm Rolf (Richard Wharton).

Li had the nerve to accuse Gabi of lying to him but apparently, the rules don’t apply to him lying to her.

Stefan has been kept secretly alive for three years. With Jake DiMera (also played by Barash) being brain-dead, his heart was placed into Stefan’s body. Since they are identical twins, there won’t be any compatibility or rejection issues.

While it is assumed that Stefan will wake up and remember Gabi, his heart might not feel the same way. History of things like this in Salem suggests that Stefan’s heart will be drawn to the person Jake was in love with at the time of his death… Ava Vitali (Tamara Braun).

Days of Our Lives spoilers reveal that Gabi tried really hard to force Jake to love her in the beginning. However, it ended up being a failure. At the time of Jake and Gabi’s breakup, he mentioned just being Stefan’s replacement. So, maybe Gabi won’t pursue Stefan like she pursued Jake, especially if his heart beats for Ava.

It is confirmed that Gabi will meet a new man, who just happens to be Alexander “Alex” Kiriakis (Robert Scott Wilson). With Alex being a playboy and getting around Salem, expect him to hit on Gabi. Knowing Gabi, she will probably get involved with Alex.

Despite Alex getting around town, he could decide that Gabi is intriguing and powerful enough to gain his interest. After all, Titan and DiMera Enterprises are competitors.

With Kate Roberts (Lauren Koslow) losing Roman Brady (Josh Taylor) and Clyde Weston (James Read) with Nancy Miller (Patrika Darbo), what’s next for the Salemite? Kate does have a thing for younger men. So, maybe Kate will hook up with Alex, which will mean a new love triangle is ahead. Could Gabi and Kate once again compete for a man, this time it being Alex?